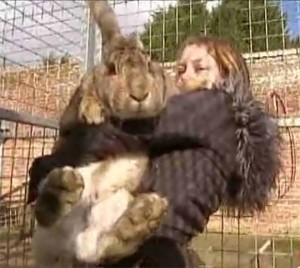 Ralph the rabbit is the world’s ‘biggest bunny.’ At two feet tall, and weighing in at 42 pounds, Ralph eats an impressive four pounds of food per day!

The giant rabbit is most likely still growing, as he is only 18 months old. His owner, Pauline Grant, purchased the rabbit for her grandchildren. Little did she know that he is a continental giant.

When one of the grandchildren was asked if he is friendly, she replied, “yes… but he’s bitten me on the leg, shoulder, and arm now.”