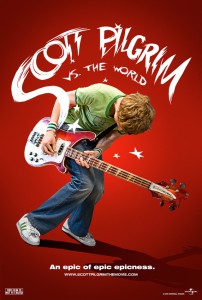 Every generation seems to have that one defining film – a picture about disaffected youth discovering not just the nature of love but the nature of relationships. Granted, these films’ heroes (and make no mistake, they’re always heroes; never heroines) have varying degrees of “disaffectedness” but they all tell essentially the same story: an alienated and generally (but genially) apathetic young man finds love where he least expects and along the way discovers that a successful relationship has more to do with what you bring to it not what you take from it. Of course Hollywood tries to make this movie, on average, approximately twice a month. The difference is that the aforementioned films’ success was far greater than that of their contemporaries. These films spoke to their respective generations. It can be easy to mock the message these films bring simply because once you’ve learned the lesson it no longer seems quite so profound. And the further away you are from having learned it, the more treacle the lesson can seem. But every generation must learn that lesson for the first time. And so the story is told and retold through the prism of the present tense. At first blush, Scott Pilgrim vs. the World appears to be just such a film.

Scott Pilgrim is an early-20s Canadian hipster-type, which should be a given seeing as how he’s played by Michael Cera. Pilgrim plays bass in an indie-rock upstart called Sex Bob-Omb and dates a borderline underage girl (forgive me, I don’t know the Canadian age of majority) named Knives Chau (Ellen Wong) when he meets, literally, the girl of his dreams. Ramona (Mary Elizabeth Winstead) is a picture of alt-rock beauty with her unending collection of black jeans, hoodies and purple hair. Pilgrim is immediately smitten, however there is one catch: in order to win her heart, he must defeat her seven evil exes. It’s here where the movie becomes something more than just your average romantic-comedy.

The concept of Pilgrim combating Ramona’s exes would, at first glance, appear to be nothing more than a sexist, male power fantasy; an insecure man compensating for his own inadequacies by perpetrating acts of violence against the men that (literally and figuratively) came before him. But Edgar Wright’s (Hot Fuzz, Shaun of the Dead) direction, combined with Cera’s performance, imbues the film’s premise with something greater. It quickly becomes evident that Pilgrim isn’t fighting Ramona’s exes as much as he’s fighting to come to terms with the idea of Ramona’s exes. It’s a rather feminist conceit for a film that seems more concerned with Final Fantasy than Betty Friedan. It just makes you wish that Ramona played a larger role in the story. Granted, it is called Scott Pilgrim vs. the World. But Ramona is, at times, almost a non-entity in the film. She exists as a love interest for Pilgrim and not much more. The movie makes almost no effort to explain why Pilgrim loves her; just that he does.

The movie’s style is where the film truly differentiates itself from its peers. It is a whirlwind of sensory overload. Based on a comic book, director Winter does everything in his power to create the look and feel of the source material. Various sounds come to life as written words, the screen often mimics a comic book’s panel structure and, perhaps most importantly, characters battle to the death. But that makes the film sound darker than it really is. “Death” is a nebulous term in this world. Though the exes that Pilgrim defeats do disappear, the picture’s heightened sense of unreality allows us to not actually concern ourselves with what that actually means. The film is a frenetic mash-up of comic books, anime and video games that seems to simultaneously make use of every square inch of its canvas.

For years filmmakers and comedians have drawn on music, movies, books and television shows for inspiration and references. Scott Pilgrim vs. the World is a pop-culture milestone in that it is the first film to draw on video games as liberally (and, more importantly, as effectively) as those other, more commonly utilized media. It’s this hyper-stylized storytelling device that will be the dividing point for many between loving the film and merely liking it. For others, it will be the difference between liking the film and loathing it. From its opening pixelated recreation of the Universal logo (complete with MIDI rendered version of the company’s musical theme) to Pilgrim’s band being named “Sex Bob-Omb”, the film trades heavily on NES nostalgia. And if that sentence made absolutely no sense whatsoever…then you’ll probably fall into the “loathe it” camp. Everyone else will be delighted.