Pujols Wins Second Gold Glove, Aims for Second Rookie of the Year in ’11

Congrats to both St. Louis Cardinals who managed to take home Gold Gloves in 2010, Albert Pujols and Yadier Molina. For Molina, it was his third consecutive award; Pujols grabbed his second award, his first since 2006. Arguably two more Cardinals could have won the award, Adam Wainwright (the 2009 winner) and Brendan Ryan. 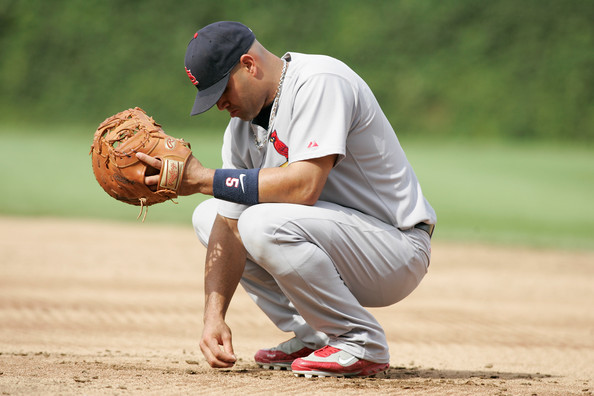 Certainly congratulations are due, but, as has been well-documented, winning a Gold Glove has lost a lot of its credibility within the baseball world. As Matthew Leach over at mlb.com wrote, winning one is like getting appointed to the Supreme Court: it’s difficult to get in, but once you do, you’re appointed for life. Derek Jeter’s winning of his fifth Gold Glove this year is a perfect example. He certainly committed the fewest errors, but his range is so limited, all the plays he made were expected. Rafael Palmeiro once won the award despite playing only 29 games at first base that season. 29! I get rejected by more women in one night. Or at least by the same woman more times.

That’s not to say Molina and Pujols aren’t necessarily deserving, Molina especially so. Molina pretty much dominated most statistical categories for a catcher. Pujols had a terrific fielding percentage, and his winning the award may be a carry-over from the last three years, when he won the Fielders Bible Award (more indicative of a fielder’s ability) but was snubbed by NL managers.

On the other hand, Brendan Ryan pretty much dominated in every Sabermetric category available for shortstops not only in the  National League, but for all of Major League Baseball. It’s possible (and probable) he didn’t receive the award because his offensive statistics were so weak. Ryan batted .223, reached base at a .279 clip, and slugged .294 while committing 17 errors for a .974 fielding percentage. Perhaps not the greatest offensive season ever, and he won’t supplant Ozzie Smith as the greatest ever any time soon, but he made some terrific plays in the field after a rough beginning. His second half was much better than his first.

Regardless, congratulations to Molina and Pujols.