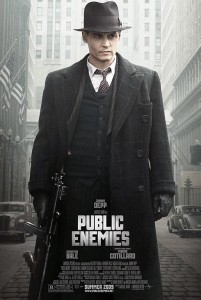 PUBLIC ENEMIES is a new-age gangster movie, packed with big names and great action. The movie is based in the early 1930’s, during the height of the Great Depression. The people are living with empty pockets, and are looking for heroes to idolize. They find their entertainment in following the crimes of the likes of “Pretty Boy” Floyd “Baby Face” Nelson. Meanwhile, the FBI and J. Edgar Hoover do not find these hardened criminals so entertaining, and are on a mission to hunt them down. Although there were plenty of bank robbers to keep the FBI occupied, they deemed the title of “Public Enemy No. 1” to John Dillinger.

Dillinger is played by Johnny Depp, who gives a great performance as the suave, sophisticated, and intelligent criminal. Dillinger is a smooth talking lady’s man, who is smart enough to know how to get in and out of a bank before the police know what hits them. But his charm is equally met by his ability to kill in order to get what he wants. It is not long before the FBI has enough of Dillinger and his friends, and instates agent Melvin Purvis (played by Christian Bale) to lead a special team to hunt down the public enemies.

As if Dillinger wasn’t busy enough with the FBI and Purvis, he decides to pursue a romantic relationship with a woman that catches his eye at dinner. Enter Billie Frechette, played by Marion Cotillard. Cotillard does a great job playing Dillinger’s naive romantic interest, who struggles with her feelings for the mobster while naturally wanting to stay alive. Billie allows us to see the human side of the famous bank robber, and proves that he still has feelings and emotions. The two characters exude an on-screen chemistry that keeps the story very interesting, while they try and have a relationship while constantly on the run.

There are no shortage of enemies for Dillinger and his rag-tag crew of gangters. When Dillinger escapes from jail, he finds that mobster Frank Nitti feels very threatened by the way he “showboats” for the press and draws fire straight to organized crime. Nitti runs a crime organization that makes Dillinger look minuscule by comparison, and does not want his racketeering to be compromised on account of the heightened FBI and police forces.

The action in PUBLIC ENEMIES is notable – with plenty of drag out, “don’t stop till everyone is dead,” shootouts every time that Dillinger’s crew meets up with Purvis’. the only problem that I had is that the shootouts were often times hard to follow. The camera work in this film is similar to that of Collateral, which was an excellent movie, I might add. Although it created a great feel to that film, I feel that it would have been best left out of this action flick. At times the movie felt cheapened by the camera work, and left me feeling like the movie wasn’t as BIG as it should have been. I think that the almost “live” looking movie takes the viewer out of the element at times, making some of the scenes not as serious. 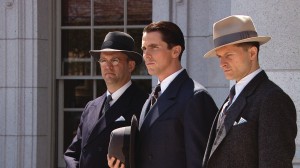 The acting and the cast of PUBLIC ENEMIES is top notch. As I mentioned before, Depp and Cotillard do an excellent job as the mobster and his love interest. The role of John Dillinger is very complex, and is perfect for a versatile actor like Johnny Depp. There are not many roles that he can’t play well. Christian Bale also does a great job as Purvis, the man who wants nothing more than to take down the most famous public enemy known to society. Purvis has a lot of weight on his shoulders, having given such a great task, and does not want to disappoint Hoover or the American public. You get the feeling that his motives are genuine, and he wants nothing more than to keep innocent people safe. He is a man that does his job, and does it well. I want to mention that Billy Crudup’s performance as J. Edgar Hoover was equally impressive, and adds a great screen presence to the film.

Although the film is long, at almost two-and-a-half hours, it keeps you interested with a combination of fast paced action, and Dillinger’s humor. If you are looking for a good gangster flick, filled with tommy guns and plenty of excitement, PUBLIC ENEMIES is definitely a great popcorn flick for a fun time at the movies.

Public Enemies gets a “B”

another review after the pic: 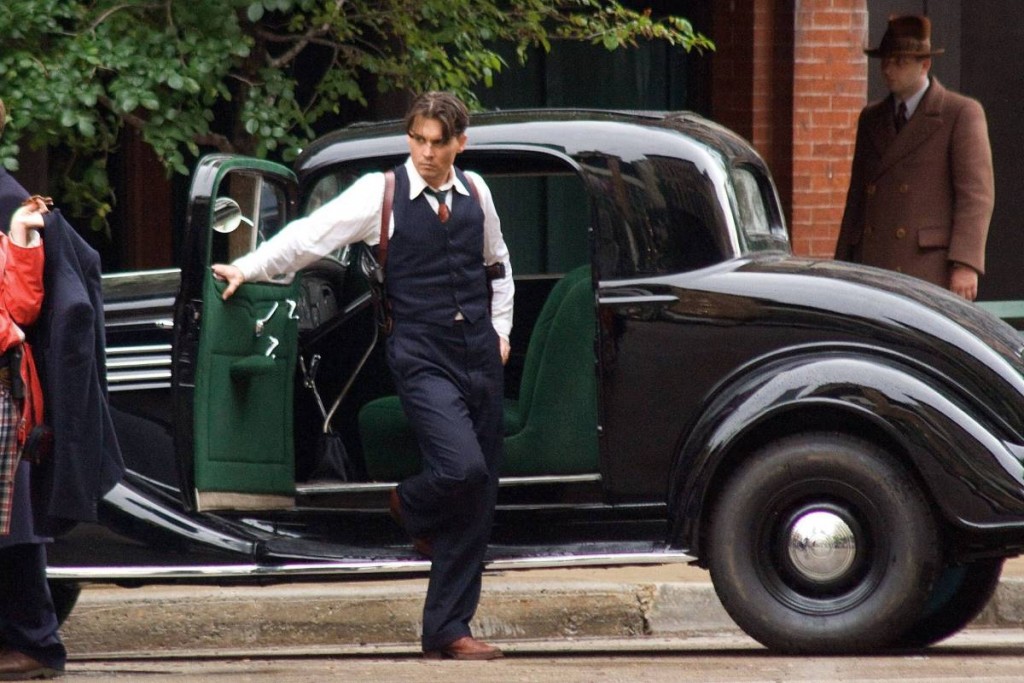 Michael Mann is back with a period biopic that chronicles the life of John Dillinger in his glory days as a criminal and the results are superb technically but it is missing that special something to make it an absolutely amazing film.

Now, what is that special something? I don’t know. But as we pick up our film and follow Dillinger from just after his turn in prison and up until his death we never get that twinge that this film is amazing. With that said, it is almost flawless everywhere you turn. The costumes, cinematography, the performances, the direction, the pacing, it is all great and one can’t really find a complaint with the movie, it was just missing something.

Paired with the heists and romance in Dillinger’s life on the run is the pursuit of enemy number one of the depression era U.S. by Melvin Purvis and J. Edgar Hoover and the beginnings of the F.B.I. Divided up about 70-30 between Dillinger and F.B.I. the film is about the larger than life Dillinger at its core. But the looks into the rise of the F.B.I. is just as engaging and compelling, especially since much of the time we follow them we are thrown into the thick of an investigation on the edge of a shoot out.

As we follow Dillinger’s courting of Billie Frechette and the occasionally bank job here or there we quickly catch on to who this guy was. A fast talking, well calculated, and passionate man that carries those feelings into his love for cars, robbing banks, and loving Billie, Dillinger was quite the character. We are treated to a couple bank robberies here and there but the bulk of the films action comes from standoffs between Dillinger and his criminal colleagues with the F.B.I. The action in the film is solid, but a bit sparse up until the later half of the film. The most thrilling scene in the film is the infamous breakout Dillinger had once incarcerated in Indiana and was apparently painstakingly accurate in it recreation. So, while the action is very good, don’t go in expecting a shoot out a minute type film, there is a lot more to it than that.

The romance between Billie and Johnny takes up a majority of the first half of the film and this is all good and well because Johnny Depp and Marion Cotillard work great together and are convincing as the new couple. These scenes are matched up with the early attempts by Purvis and Hoover to get the F.B.I. off the ground and trying to help bring a stop to crime in Chicago where folks like Dillinger and Baby Face Nelson are running wild. Purvis’ struggle to hunt these men and get the most out of the men he has who are not cut out to chase armed and dangerous men.

The actors in the film are top notch across the board and they are anchored by the always great Johnny Depp who is fantastic as the charismatic Dillinger. Now, don’t take that statement of charisma as being flashy, Dillinger and Depp are nothing of the sort. Depp’s directness and earnestness mixed with a sly sense of humor just make the performance pragmatic yet controlled that leaps off the screen. Bale is great again here as well in the supporting capacity after a so-so turn in Terminator earlier this summer. As Purvis he is cold, calm, and calculated but might be in a little over his head. Bale is able to portray the man still confidently and not like an idiot even when the character might be overstepping his bounds keeping Purvis’ demeanor consistent across the board. I also find it quite astonishing as well in Bale’s performance that once you go back and think about it after you learn about Purvis’ demise, Bale was giving hints of this in the man during his performance just barely sitting there behind his eyes; great stuff. Marion Cotillard delivers a fine little performance throughout and knocks it out of the park in her final few scenes. I don’t want to spoil anything but you will know what I am talking about when she just shines in the final act of the film. Along the way we also get a lot of spot performances from a wide and talented ensemble. Billy Crudup is the brightest stand out from these as J. Edgar Hoover and just shines as the hardened and smooth talking start up administrator of the F.B.I.

In the end, Public Enemies is an extremely well made and entertaining film. Anchored by fantastic performances by Depp and Bale the film will have you complaining about next to nothing. Solid action, good story telling and solid pacing it will engage from start to finish. Sadly, something is missing to make this an A+ picture and I can’t really put my finger on what it is, it just didn’t give me that overall feeling of awe. It is a nice balance of Dillinger and the upstart of the F.B.I. and I think if you focused on either anymore the picture would have started to bloat. With that said, you still shouldn’t miss it as it is one of the finer pictures of the year and an excellent crime drama for the adults to enjoy this summer.