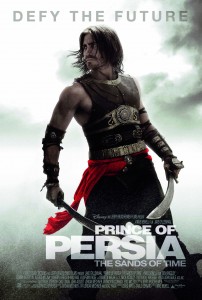 Tonight – Monday, May 17th at 7pm CST – the cast and filmmakers of PRINCE OF PERSIA: THE SANDS OF TIME, starring Jake Gyllenhaal and directed by Jerry Bruckheimer, will appear at the Hollywood Premiere via a live stream from IMDb.

Check out the live stream tonight at imdb.com/special/princeofpersia

Also, Sprint is presenting an event called “A Cinematic Celebration of Jerry Bruckheimer” at the Hollywood premiere tonight. Five hit films that Bruckheimer produced will be introduced by the actors or directors that made them a success. They are:

“Pirates of the Caribbean: The Curse of the Black Pearl” (2003)
El Capitan Theatre, 7 p.m.
Orlando Bloom, Jack Davenport, Jonathan Pryce and director Gore Verbinski will reunite to introduce the film that kicked off one of the most successful franchises in movie history, and a cultural phenomenon.

“Beverly Hills Cop” (1984)
Mann Chinese 6, 7 p.m.
Eddie Murphy will present the much-imitated but never improved upon action comedy that catapulted him to superstardom.

Check out the live stream tonight at imdb.com/special/princeofpersia. And don’t forget! PRINCE OF PERSIA: THE SANDS OF TIME will be released in theaters nationwide on May 28th!