For the Cardinals, shortstop’s been one of the weaker positions the past few years. Ever since Edgar Renteria signed with Boston after the 2004 season, the Cardinals have been clamoring to find a shortstop that can offer solid defense with a decent stick. David Eckstein was decent, but not spectacular, at both. Cesar Izturis was an above average fielder and a banjo hitter. Brendan Ryan was defensively perhaps the best fielding shortstop in the league but experienced a sharp decline in his offensive production in 2010 and was then traded in the offseason for Maikel Cleto. Ryan Theriot was signed from the Cubs last season, and although he was a slightly above-average hitter, he was a defensive liability, and the Cardinals brought in Rafael Furcal mid-season to stabilize the position.

Rafa did a decent enough job at short that after the World Series, he signed a two-year deal to remain the starting shortstop. Six years ago, I would have loved the signing. Now? Eh. Furcal’s a decent shortstop, certainly better than the rock-like hands Theriot had, but he’s also been dealing with injuries the last couple of seasons. 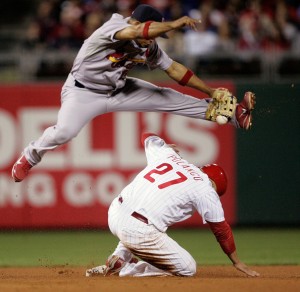 When he’s healthy, he’s a pretty decent-hitting shortstop. For four seasons he averaged 14 home runs, and for his career he’s hit .282/.348/.408. He also used to be a solid base-stealer, ganking 40 or above twice in a season. He’s slowed down a bit, and he struggled to hit consistently last season, but he did regain some of his pop with the Cardinals. As a Cardinal he hit .255, nearly 60 points higher than he hit with the Dodgers. He also hit seven home runs in just 50 games with the team, which would average out to more than 20 over the course of a full season. IF he can remain healthy, though, there’s no reason you couldn’t expect a solid .270/.330/.410 out of him, with a dozen home runs. He switch hits, but his career splits are about the same, although he does tend to have a bit more power left-handed.

Fielding-wise, he provides a vast upgrade over Theriot in terms of range. His lateral movement is much quicker, and he reached several grounders that likely would have gotten past Theriot. Unfortunately, he didn’t field the ball as cleanly as he used to, as he committed ten errors while with the Cardinals. This is a problem that’s always plagued him, and Cardinals fans would be wise to expect the same: some spectacular plays mixed in with some headshakers.

The Cardinals have taken a bit of a gamble on Furcal, hoping he’ll be able to stay healthy. If he is, the $7 million per season could be well-earned.

Should he break down, the Cardinals will likely rely on Daniel Descalso and Tyler Greene to cover for him short term. Should he be out for a while, and Greene and Descalso get wiped out by a mysterious asteroid or some other freak accident, the team would likely turn to…

Kozma was the Cardinals’ first-round draft pick in 2007 out of Owasso, Oklahoma. He was picked primarily for his defensive promise, but he’s struggled to stay ahead of the game and validate the high pick. Although he did hit 13 home runs at Springfield in 2010, he’s repeatedly struggled to hit for average or get on base. His defense, considered his forte, has been suspect as well, as he committed 34 errors in back to back seasons. He did improve a bit last year in the field, but he’s not shown any reason to project him as anything other than a bench player. He is just 23, and while there is room for improvement, he appears to have dropped in the depth chart.

Most people who follow the Cardinals’ minor league organizations would agree this is the guy the team’s hoping to claim the title of starting shortstop by the time Furcal’s contract runs out. Jackson’s just 23, but will most likely start the season at AAA Memphis after just two and a half seasons in the minors. His defense is considered major league-ready, and scouts project him to be one of the top fielders in the league. The Cardinals have paced him in order to let his bat catch up, and last year at Springfield, he hit .278/.334/.415 with 11 HR and 73 RBI. He still needs a bit of work, as he strikes out nearly once every six at-bats, but hopefully with a couple more seasons of work under his belt, he could be ready by the time 2014 rolls around, or even sooner if Furcal goes down.