Welp, here’s where the preview gets tricky.

For the past three years, Skip Schumaker’s been manning second base for the Cardinals, but with the acquisition last year of Nick Punto coupled with the emergence of Daniel Descalso and the shift of Ryan Theriot to second once the Cardinals traded for Rafael Furcal, Skip became a part-time player. He signed another two-year extension this year with the Cardinals, but he’s going to primarily be a fourth outfielder. Punto’s also removed from the situation, as he signed a deal with the Boston Red Sux. Theriot, too, has departed via free agency, heading west to San Francisco.

This means that, unless the Cardinals pull a late move, there are two real viable options at second base for the Cardinals to begin the season.

Quick, name the two Cardinals who appeared in the most regular season games last season. Obviously, on a team laden with stars like Albert Pujols, Lance Berkman, Matt Holliday, and Yadier Molina, the answer would be Jon Jay and Daniel Descalso. 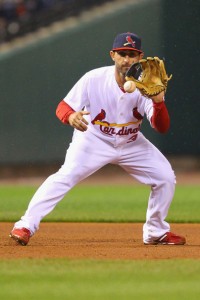 D-Money, or Dirty D, or Double D, or whatever you want to call him. ( Photo by Dilip Vishwanat/Getty Images North America)

As you might discern from the line above, Descalso’s value lies more in his defensive contributions and his versatility. Descalso received the bulk of his playing time starting at third when David Freese went down with a broken hand, starting 61 games there, but he also started nine games at second base and 11 at shortstop.

Descalso came in as a late defensive replacement even when Freese was healthy. His fielding statistics weren’t the greatest, but considering he spent the majority of his entire minor league career at second base, he performed decently. Although second and third are both infield position, they require different tool sets. Second requires solid footwork and quick lateral movements, as the second baseman and shortstop have to cover a lot of ground behind the pitcher. Third base, by contrast, is primarily a reflex position. Colloquially known as “the hot corner,” third base sees a lot of  shots down the line from righties pulling the ball; as a result, third base has less time to react and relies on quick twitch reflexes and must possess a strong arm.

Descalso has perhaps the strongest arm of the infielders, and although he did commit six errors at third, he also made several highlight-reel plays that Freese most likely wouldn’t have made. Moving back to his natural position should improve his defensive metrics and may provide enough of a comfort zone to provide a boost to his statistics. Although he isn’t a great hitter, he’s a career .276/.347/.406 hitter in the minors, and he hit eight, ten, and nine home runs in his three full seasons he spent in the minors.

Since he has the most experience at second base of any remaining candidate, it’s likely Descalso will get the opportunity to start at second. Again, this is contingent on the Cardinals not signing any free agents to man the spot. It doesn’t seem likely, but then again, you never know. 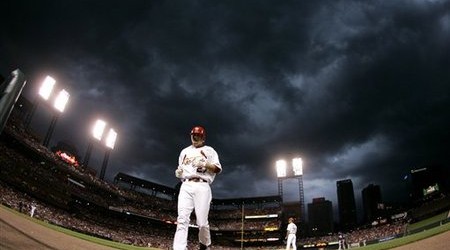 Tyler Greene, as seen from the view of an ant. (AP Photo/Jeff Roberson)

Well, he may have taken his old number, but Tyler Greene certainly won’t remind anyone of Scott Rolen. The 2005 first-round pick out of Georgia Tech, Greene’s struggled over three major league seasons to provide much return on the investment.

Greene has primarily played shortstop both in the minors and major leagues, but the possibility of him learning to play second base has been raised. It’s again a transition between the two, but not nearly as much of a switch as between third and second base.

Greene’s always displayed decent power in the minors, hitting between 15-20 home runs each season, and his career OPS is around .800. Last season as he shuttled between St. Louis and Memphis, he gave fans hope while with the AAA club, as in just 66 games, he hit 14 home runs and hit .323/.422/.579. Greene also has above-average speed, as twice in the minors he’s stolen more than 30 bases (he also led the Cardinals last season in stolen bases with 11, despite playing in just 58 games). Greene’s still not a fully polished product, but the Cardinals will be banking on his athletic ability to help ease in the transition. I’m still not fully sold, however, and it’ll be interesting to see the situation play out as the season goes on. If Descalso and Greene prove to be inadequate, look for the Cardinals to trade for a stopgap.

Go ahead, make fun of his name if you feel so inclined; this kid might be the future of the Cardinals’ infield in a couple of years. 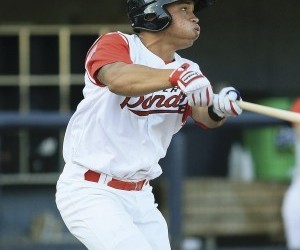 Kolten skipped rookie ball and went straight to low-A ball at Quad Cities, where in 47 games he managed to hit .335/.401/.510 with five home runs. Scouting reports listed him as one of the best pure hitters available last year, and watching video, the guy’s got tremendous bat speed. He’s short, 5’9″, but he can drive the ball with decent gap power and could probably hit 10-15 home runs a season, if not more. His fielding is considered average to above average, and many scouts think he could turn into an above average second baseman with a plus bat.

You’ll get to see more Wong in spring training, as he has an invite to Jupiter. Don’t get too excited, though, as it’s standard practice to invite higher-ranked prospects to work out with the veterans and get a feel for how they prepare for the season.