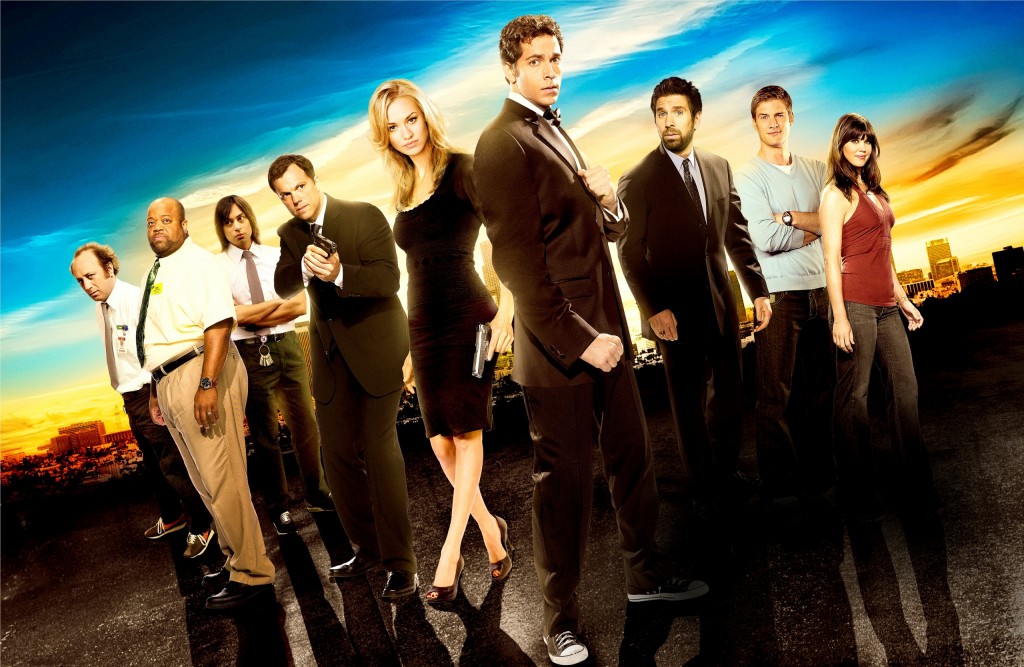 Fall of 2007 was an odd year. A lot of promising TV shows launched that fall, and almost all of them were loaded up by my DVR every week. Pushing Daises, Journeyman, Reaper, and Aliens in America were all favorites of mine that year, and all of them ended much too early, most of them due to the unfortunate writer’s strike which brought their first season production run to a halt. However, there was one that stood out above all of them for me, and that show was Chuck.

The pilot to Chuck was a top notch spy-comedy hybrid that told the story of the hapless Chuck Bartowski (Zachery Levi), a down on his luck retail employee who was capable of much more. Chuck had in the past couple years gotten kicked out of college through a betrayal from his college roommate and friend, Bryce Larkin (Matthew Bomer). When Bryce sends Chuck an encoded message containing all the governments secrets, also known as “the Intersect”, Chuck becomes the most important person in all of the US Intelligence agencies. What ensued was a number of fun adventures, that sometimes were over the top, but always were brought back to earth by clever writing, and solid acting.

Having just recently watched the pilot again, it’s hard to believe that the show didn’t gain a larger fanbase. The pilot has great camera work, snappy dialogue, a very intriguing premise, and a cast that automatically clicks. In fact, having now watched that pilot multiple times, it might be in my top 5 pilots of all time next to pilots like Lost, Arrested Development, and Firefly.

It’s no wonder that I would’ve gravitated to a show like Chuck. I myself shared a lot of similarities with the title character.  We both worked retail jobs that we were frankly overqualified for; Chuck being a member of the Nerd Herd, me a member of Circuit City’s Firedog. Chuck’s interests in movies, shows, and games aligned with my own. However, I think I related most of all to Chuck’s sense of wanting more. That sense of knowing that you were capable of more than what you are doing at that moment. I didn’t have something like the intersect land in my lap, or a beautiful woman like Yvonne Strahovski (still waiting for that), but watching the show gave me a great escape to think something like that were possible.

Sure, I didn’t find all of Chuck perfect, at times I found much of the Buy More storyline distracting, but I usually came around in the end.  Chuck was very much an homage to many great geek films, and the campy fun some of those films contained. This allowed them to use actors like Linda Hamilton (Terminator), Scott Bakula (Quantum Leap), Timothy Dalton (James Bond), Chevy Chase (Fletch), Christopher Lloyd (Back to the Future), Bruce Boxleitner (Tron), and more in ways that gave opportunities for in-jokes with much of the audience.

Chuck was never a show that was easy to casually approach. The show was much more enjoyable if viewed upon a specific timeline, and many of the Buy More elements could be a bit annoying without the setup of previous episodes. Even something like the constant Subway promotions could be distracting to someone who didn’t know the show. (Subway was brought in as a main sponsor to save the show in the final few seasons.) If given the chance, any viewer could see that the show had a compelling story, and one that was told with a lot of heart.

It was bittersweet watching the finale from last night. Not everything ended the way one would hope, but the optimism of the show never left.  It was incredible to see the change of the characters from season 1 to the very end of season 5. Chuck goes from moping geek, to top notch super spy. Casey turns from a character that is almost despised at the beginning, to a softened character that would do anything for the team he hated in the beginning. Sarah goes from wanting a life of danger, to a life with a bright future of a house with a red door and white picket fence. Morgan, still the eternal goofball, even matures quite a bit throughout the series.

It’s always sad to see a show like this go. It’s nice having a show that can constantly bring your mood up, and allow a geek to dream of better things. If you have some slightly geeky tendencies, and like shows that have a lot of heart, Chuck is one you shouldn’t miss. It’s too bad I didn’t convert you earlier, then maybe we wouldn’t be saying goodbye.