The production of the Man of Steel sequel is set to begin in just a few months.  It was only a matter of time before we started seeing pre-production art work and possible concepts for the new Batman’s gear.  According to Bleeding Cool, this picture by artist Steve Scott (the artist behind the comic adaption of The Dark Knight), was posted to a Facebook page and offered for sale. Apparently, it was pulled pretty quick. 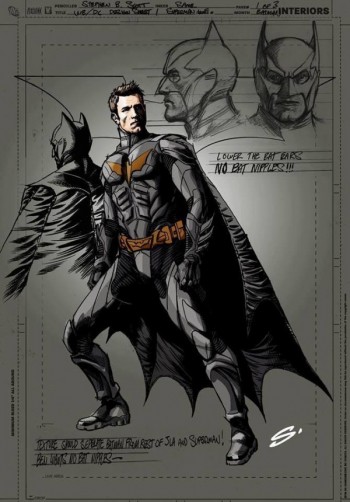 I am in no way confirming that this is a real concept for the suit.  It’s nothing more that a rumor. That being said, I really don’t think this is what the suit will look like.  We may see something that ‘s close, but not this exact suit.  I’ve stated before that I would like to see some greys, blacks, and dark blues thrown into the new suit. A sort of urban camouflage.  I also like the idea of there being some yellow trim around the Bat symbol on the chest.  It’s a nice throw back to the older suits while keeping it modern.  I really like this version of the cowl.  It looks a lot like Gary Frank’s version from Batman: Earth One.  What do you guys think?  What would you like to see from the new costume?