I recently just re-watched the whole Bourne Trilogy. Part of me feels that a trilogy should stay that way, but those movies have to be among the most entertaining of the decade. It is hard not to hope for another installment. I’m sure Matt Damon doesn’t want to be stuck doing the same character for the next 20 years, but Bourne has almost as much draw as James Bond now. Where as Bond can be played by multiple actors, Bourne is solely Damon’s role now. It sucks to hear that Paul Greengrass is leaving the project after a dispute. This could also mean a dropout for Damon who is friends with Greengrass and stars in his latest, Green Zone. 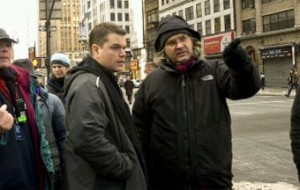 We honestly figured someone like Nikki Finke would be breaking this before us (and our source was a little surprised as well), but she’s been a little AWOL of late which leaves the door open.

Sources and friends close to the project tells us that Paul Greengrass has quit “Bourne 4” and walked away from the project. This actually happened more than a week ago, and we’ve been getting our ducks in a row before publishing this report (and again, we’re shocked Finke or the Wrap didn’t get wind of this yet and way before us).

If you’ve been following our Bourne reports of late, you know we’ve been hinting towards trouble on this project for some time now, but it’s not hard to discern even as an outsider.

Two scripts have been written for the project, which is not exactly a vote of confidence. One penned by George Nolfi (who co-wrote ‘Bourne 3’ and is currently busy working with Matt Damon on “The Adjustment Bureau”), and a few months ago, Universal hired another scribe, Josh Zetumer, to write what they are diplomatically calling a “parallel” script. Zetumer has been a Black List favorite for several years, and has “The Infiltrator” in development with Leonard DiCaprio’s company, Appian Way, and wrote Peter Berg’s “Dune”– he is hot to say the least.

A small part of the problem? Greengrass, who has been busy toiling away on “Green Zone,” was not consulted by Universal in the hiring of a new writer. This obviously did not make him happy, but that’s only part of the issue that’s been ongoing for some time (meanwhile, no one seems to love Nolfi’s version).

Matt Damon has already said that “Green Zone,” another Universal film that Greengrass directed, cost $100 million to make. But the price tag of this Iraq War-set thriller is actually close to $150 million– Greengrass has reshot several times (gets expensive) and has been tinkering away in the editing room for months spending Universal’s money and testing their patience. This was supposed to be a smaller movie that Greengrass made in between ‘Bourne’ films, something Universal let Greengrass make to keep him happy and part of the Uni/Bourne family, but you can bet when he said, “(expensive) Iraq War thriller,” the studio wasn’t exactly jazzed, even if Matt Damon was the star.

Going further back, “The Bourne Ultimatum” was a huge hit, obviously, but again was made in a similar fashion: very expensive and lots of reshoots because no screenplay was finished. Greengrass is now infamous for “finding the movie” or “figuring it all out” during the middle of production. As in, shooting lots of various things and letting the story naturally and organically come to the surface. He’s fine with continuing that approach on “Bourne 4,” but after the “Green Zone” expense, the buttoning-up of budgets across the board and the major overhead of ‘Bourne 3’ (that had to be a huge hit to be successful), Universal does not want to take that risk once again and the studio and director have been butting heads on that point ever since. Considering everything Greengrass did with the Bourne franchise, he hasn’t been happy how he’s been treated on “Green Zone” and how hard the studio has been riding him. It seems like the straw has finally broken the camel’s back.

So right now, they’re citing “creative differences” and we expect this to hit the trades at any moment.

There’s chatter about this all around CAA, and Universal surely doesn’t want word to get out. The conventional wisdom is that Greengrass and Universal can kiss and make up and in a few months they could be right back at it, but as a rather famous director said this weekend, “So, I guess they’re looking for a new ‘Bourne’ director, huh?”

What’s Matt Damon’s take on this? He’s “loyal to Paul” which means he’s likely not going to star in any “Bourne 4” film without him. Or at least not without his blessing and even then, it would have to be a spectacular script (and right now one of those doesn’t exist, but Universal has been exploring other options….).

So with the recent Comcast/Universal deal on the horizon (Comcast will likely buy 51% of NBC Universal from General Electric, i.e. proposing to take majority control of the movie company) what does that mean? Well, one of the first things Comcast apparently did was call Patrick Whitesell (Damon’s agent) within the last two weeks to ask if Matt was going to do the ‘Bourne’ film or not because it was going to figure in their valuation for the studio.

So there might be pressure there and it will probably behoove Universal to kowtow, kiss butt and make nice with Greengrass to bring him back into the fold. It could happen and it’s not unreasonable to think that it might. Meanwhile, Greengrass has been sniffing around a biopic of [redacted] that we can’t say anything else about.

Some have suggested Greengrass walking away is a “typical Paul move” and again, that he possibly could be back on the project in a few more months, but at the very least it does strongly indicate the tension and problems that have been brewing between the director and the studio for several months now.

“Bourne 4” is way off schedule. The studio, Greengrass and Damon’s schedule (which he kept open) was hoping to shoot the film in the fall of 2010. With no script, that’s unlikely going to happen (though anything’s possible). Damon said earlier this fall (before Greengrasss quit) that the film was probably 18 months away from even going before the cameras. During TIFF he said two years. — addition reporting by Kevin Jagernauth

Doesn’t seem like this is going to happen does it? Oh well, I guess I’ll have to be happy with the three amazing movies that are out.