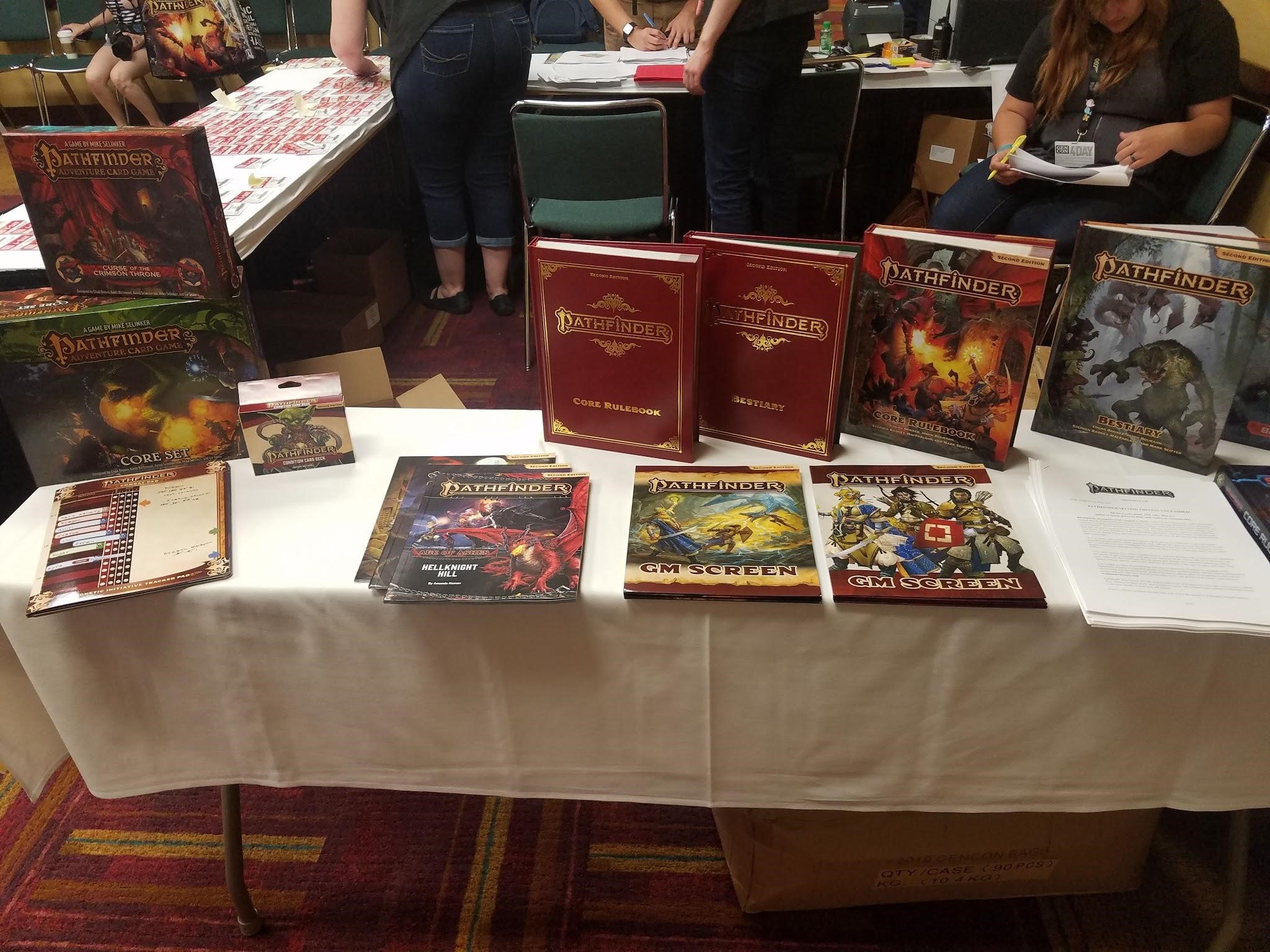 Pathfinder has been, for the past decade, one of the world’s most popular tabletop roleplaying games. Born from a modified version of the third edition of Wizards of the Coast’s iconic Dungeons & Dragons RPG, Pathfinder was released by publisher Paizo in 2009 at Gen Con Indianapolis. Employees of Paizo had such a love for D&D 3rd Edition that they wished to see new materials and improvements on existing ones continue to be published even after Wizards moved on to the 4th Edition of D&D. Fortunately, as D&D 3 was published under an Open Gaming License, they were free to do exactly that. The game quickly grew, and currently has 32 official rules and supplemental publications, not counting the myriad of pre-constructed adventures for Game Masters (GMs) to run for groups of excited players. An organized play league known as the Pathfinder Society (PFS) formed, and Pathfinder even spawned a slew of its own third-party publications, much like it itself had originally been for D&D.

Despite remaining very popular in the RPG community, in 2018 Paizo announced their intention to produce a second edition of their game. That same year, also at Gen Con, they kicked off what would be one of the most widely participated in tabletop playtest periods ever. For the next six months, players tested a variety of characters across a spectrum of levels, filling out surveys about their experience as they went. Paizo internalized the feedback and made rapid and numerous changes to the system as time went on, even taking unofficial feedback and releasing updates well beyond the end of the official playtest period. Finally, on August 1, 2019, once more at Gen Con, Pathfinder 2 officially launched.

On launch day, the first day of the convention, customers lined up to buy the new releases, completely filling up Paizo’s spacious allotment of the show floor. In addition to the main-line products (the Core Rulebook and Bestiary), Paizo offered two pre-constructed adventures to help players jump right into their new game. Also available were a number of supplemental products including GM screens, combat tracker pads, full-color battle maps, and more. In case that wasn’t enough to excite, many third parties were contracted to produce products or content to coincide with the launch. Custom dice, pre-painted miniatures, and terrain pieces were available for purchase or pre-order. Digital services such as character builders and custom soundboards were ready to go. A number of actual play podcasts had been given materials early to help promote the game, and one even had a live show at the same convention. In all, Pathfinder 2 had an extremely well-supported launch, and the players’ excitement just compounded that. 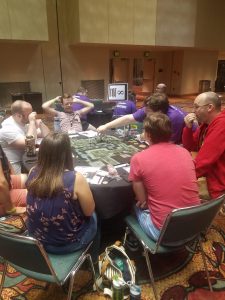 There was also a lot of Pathfinder 2 play to be had at the convention. In addition to an introductory adventure to be played with pre-generated “iconic” characters, custom character-building sessions and the first three chapters of the new PFS season were run, all numerous times over the course of the weekend. Even so, tickets for these events sold out quickly and entry became hard to come by, with hordes of hopeful players having to be turned away day-of. In addition to new and returning players simply curious about the new rules, dedicated PFS members were out in full force, looking to dive into a brand new ongoing story with brand new characters.

Reception to the new system and the changes that came with it seemed very positive. One playgroup (with eight years play experience with the first edition) noted that the second edition seemed clearly geared towards newer players after playing the introductory adventure. They found the rules to be more streamlined, with more general action choices available meaning fewer specific rules for players to need to learn. This sentiment was echoed by Jason Bulmahn, Director of Game Design for Paizo, in that a main focus during the creative process was on intuitive gameplay. Also very important to Bulmahn and his team was the players’ immersion, so they had to walk a fine line between mechanically intuitive rules and realistic interactions. In this same vein, Bulmahn also noted that sometimes complicated was better for the game, even if newer players might struggle slightly. The experienced players seemed to thrive on the more complicated rules, ironically struggling a bit more with the rules that had been changed to be simpler than their first edition counterparts. Even so, the consensus among these players was that the new rules generally made “real world” sense, and they would become second nature soon enough. This reaction was not unexpected from Paizo. Logan Bonner, a Designer and primary writer of much of the game’s material, was aware that the focus on new players would present some challenges to established players, but was still positive that such a focus would not be unwelcome.

Going forward, Paizo already has a bevy of new material slated for release later this year into early 2020. While unnecessary to play, the Game Mastery Guide and Advanced Players Guide will provide new options for GMs and players respectively, as well as tips and tricks for running and playing in games. The Bestiary 2 will provide more enemies to fight, and the Lost Omens World Guide will provide both options and background related to Golarian, the default world that most Pathfinder games take place in. Adding to all these is, of course, a slew of new pre-constructed adventures for GMs to run. The details of these and future publications are not necessarily set in stone, however. Both Bulmahn and Bonner keep a close eye on the game and its players, making sure the game seems healthy and the players seem happy. Generally, the content of future releases is influenced by the state of the game. The team keeps an eye on previous releases as well and is prepared to errata existing rules in extreme cases.

At the end of the day, the players all agreed that not much had changed in the grand scheme of things. Pathfinder has remained a collaborative storytelling game to play with friends new and old. Dice will be rolled, arguments about rules will be had, and dirty jokes will be made. Monsters will be slain, enemies will be made, and worlds will be saved. Excitement seemed to be the main theme of the launch. New players were excited to pick up something designed for them. Existing players were excited about the new players as well as being excited to try out a new rendition of one of their favorite pastimes. Paizo was, of course, excited to release a new product to all of their excited fans. Pathfinder 2 experienced a clearly successful launch, and the momentum of excitement is only likely to build from here.

Pathfinder 2nd Edition rulebooks and supplements can be found now at most local book, gaming, and hobby shops.