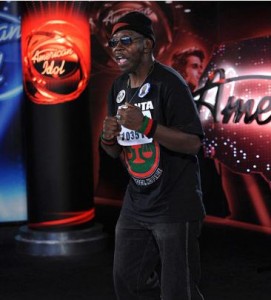 "The General" Larry Platt performs his original song, "Pants on the Ground" for the judges on American Idol

In my opinion, the American Idol formula is wearing a little thin. When Simon Cowell is deciding to leave the show and mega-bucks behind, I think it is especially clear. It really is just more of the same every season, and it seems like the contestants that don’t even win the competition often become more popular than the winners themselves. That is with the exception of Kelly Clarkson, who won the very first season.

Probably the most entertaining thing about the entire show is the originality that it has left – the auditions. At least here, if you have to watch the show in the beginning stages of the season, you get to see originality for the most part. New contestants, new talent, and of course – new silly auditions. Sometimes there is a real gem that shines through. And that gem, in season 9, seems to be an original song performed by “General” Larry Platt called “Pants on the Ground.”

Below is the original song, “Pants on the Ground,” sang by Larry last week during the beginning American Idol auditions:

Not even a week later, the song has gone viral across YouTube – and has spawned a slew of covers and remixes. You can find everything from acoustic covers to some pretty hardcore hip hop remixes. Below are some of the best:

(HIP-HOP REMIX) Pants on the ground “the official remix”

This one is pretty darn good remix.

Here is an acoustic cover that sounds pretty darn good. Regardless of the lyrics, I think this guy could make a lot of songs sound good.

This one uses a vocoder, and puts some pretty smooth sounds together.

Not bad, not bad.

A different sound – but surprisingly catchy

What is your favorite version? Leave yours in the comments below!