“Ouija” Movie to be an Action / Adventure 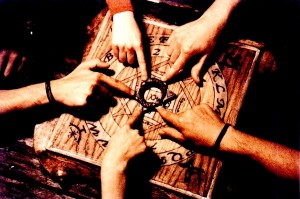 A movie based on a board game.  For me, that sentence just spells disaster on multiple levels.  Only a few have ever been successful.  The rarities include the hilarious murder mystery Clue which still stands as my favorite film to watch whenever it is on tv.  Jumanji is another film that I loved as a kid.  I still enjoy it.  Just not as much.

Screenwriters Edward Kitsis and Adam Horowitz recently talked about their Ouija based movie while doing press for their current film TRON: Legacy.  The two referred to the movie as “Indiana Jones, that kind of tone.  It’s a big adventure movie”.  The two writers have done some great stuff with Felicity and Lost.  Can they strike gold again?

Out of all the board games that are in production, I think the Ouija based movie is the worst.  And I cringe at the thought of Rihanna in Battleship.  I just feel like this should be a scary ghost film.  Not an action/adventure.  The production has bigger issues right not seeing that their director, Pierre Morel, is no longer attached.  Maybe a good director will bring some better story ideas.  Chances are not.