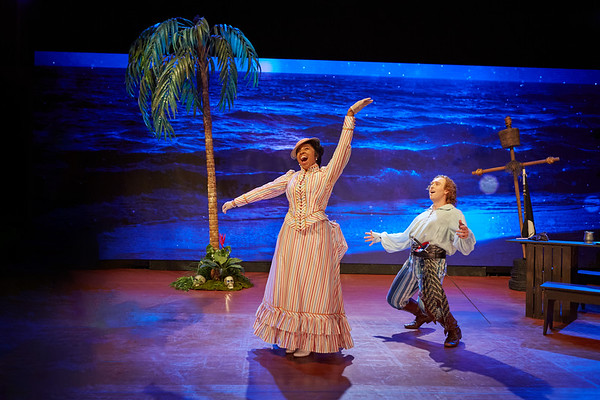 At a time when the arts face unprecedented challenges in connecting with audiences, Opera Theatre of St. Louis is continuing its mission to educate and entertain with a new production of The Pirates of Penzance that provides rousing entertainment for the entire family.

Clocking in at thirty minutes, this abbreviated version of The Pirates of Penzance is part of the company’s Opera on the Go! series, which presents programming designed to engage children with opera through live productions and workshops on singing, design and makeup. While

director Shawna Lucey’s version sheds much of Gilbert and Sullivan’s trimmings for the sake of simplicity, it doesn’t sacrifice any core elements of the story.

The plot revolves around Frederic, a child who is apprenticed to a ragtag band of pirates. Taken in as one of their own, he spends his formative years on the high seas raiding ships and plundering treasure.

Despite a lifetime of adventure, Frederic is eager to make his own mark in the world once his servitude is over. As his twenty-first birthday looms, he is excited about the opportunities before him, especially the chance to meet women.

Happy to be free and looking to settle down, Frederic becomes enchanted by Mabel, the daughter of Major General Stanley, and a sworn enemy of his pirate family. Filled with love and determined to please Mabel’s father, Frederic begins to plan his future.

However, his best plans are turned asunder after he reads the fine print in his contract. Because he was born on February 29, a date that only arrives every fourth year, Frederic isn’t technically twenty-one years old, but five. Hence, he is still in service to his master, the Pirate King. From here the story becomes fanciful and frolicking as Frederic looks to follow his heart without walking the plank.

Aided by digital projections and a robust musical score, The Pirates of Penzance roars along at a breakneck pace propelled by the energy of its prolific ensemble cast. At the forefront is baritone Ryan Johnson (previously seen in Opera Theatre’s 2019 production of Rigoletto) as Frederic, who gives the character some serious range in a condensed amount of time. OTSL alum Benjamin Taylor delivers perfect comedic timing as the Pirate King.

Joining them are Alex Rosen, who shines as Major General Stanley and Angel Riley, who

gives a stunning performance as Mabel, continuing her ascension as one of opera’s talented young stars. As Ruth, a mother and mentor figure to Frederic, the dynamic Stephanie Sanchez provides the show with some emotional heft.

Although hanging out with a band of pirates is generally not recommended, Opera Theatre of St. Louis’ production of The Pirates of Penzance is a refreshingly welcome exception. A fine dose of comedic opera, this romp is stocked to the gills with great music and plenty of swashbuckling fun that is sure to please audiences of all ages.

Opera Theatre of St. Louis’ The Pirates of Penzance is available for classroom streaming through June 2021. Public streaming is available through February 6, 2021. For tickets and more information on the 2020-2021 virtual season, visit opera-stl.org.