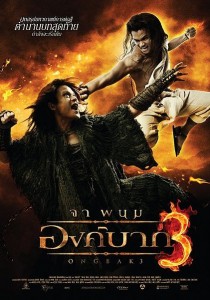 I can honestly say I have no idea what is going on in this trailer. Tony Jaa appears to be about eighteen different people in this trailer, and a couple of them apparently got one too many Hot Topic gift cards for Christmas. Although, you don’t really watch an Ong Bak movie for the story, you watch for the fights. If you watch for the stories, it is pretty much the same thing as going to the strip club for the reasonably priced drinks.  As long as there is an obscene amount of martial arts action in here, I think I’ll be happy.

The legend of Ong Bak 3 begins after Tien (Tony Jaa) has lost his fighting skills and his beloved stepfather at the Garuda’s Wing cliff from the raid led by Jom Rachan (Saranyu Wonggrajang). Tien is brought back to life with the help from Pim (Primrata Dechudom) as well as Mhen (Petchai Wongkamlao) and the Kana Khone villagers. Deep into the meditation taught by Phra Bua (Nirutti Sirijanya), Tien finally is able to achieve ‘Nathayut’. His talents are put to the test again when his rivals including the Golden-Armored King’s Guard (Supakorn ‘Tok’ Kijusuwan), the mysterious killers in black, and Bhuti Sangkha (Dan Chupong) return for the final massive showdown