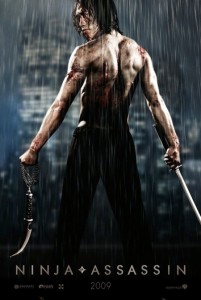 In the very first scene of Ninja Assassin you figure out that this isn’t a film for everyone. A Yakuza gangster is taken down in a shroud of mystery and spurts of blood. When I say spurts of blood I mean geysers of blood pouring in from every corner of the screen. There is about as much blood in this film as there is water in Titanic. Unfortunately, blood does not equal excitement, and the audience that wasn’t alienated by the gore will be bored by the story.

Imagine a world where ninja’s are the true assassins of the world. Their price has not changed in a millenia, a hundred pounds of gold. These shadowy organizations consist of many clans, the deadliest of them all is the Ozunu Clan. They continually fill their rank and file with orphans who are then trained to be ruthless killers who live in the shadows. Through flashbacks we are told the story of Raizo who although skilled has turned his back on his brothers due to personal loss he experienced at the hands of the clan. Raizo teams up with Europol agent Mika to protect her as she uncovers the atrocities committed by the Clans.

On paper the story sounds interesting. It has the makings of a great kung fu film. All powerful shadowy organization? Check. A plot for revenge? Check. Potential for lots of fight scenes? Check. So, if all that is there, what goes wrong? Well, first off we have almost no chemistry between any characters. They might as well be separated from each other using glass. You never get the sense of why anyone is doing anything they are doing. Raizo (played by Korean pop star Rain) seems bored by everything, and out more to kick start his dull manner than revenge. Mika (Naomie Harris) is made to be the true hero of the story, but more often than not is just the damsel in distress. The only character I couldn’t pin down completely was Maslow, Mika’s superior. Ben Miles, who is a frequent collaborator of James McTeigue and the Wachowski brothers, is forced to go back in forth from one kind of character to another. He looks incredulous to the fact that there might be actual ninjas, but a second later he has accepted it so readily that it will make your head spin.

No one really goes to a film like this to see a story. How is the action? The effect of people being sliced in half, and blood spurting from their newly diced openings will make many people cringe. Others it will make whoop and laugh for the first bit. After a while it because a gimmick that overshadows what might have been some cool fight choreography. Much of the action is so dark and special effect laden. The fight choreography is fun at times, but it doesn’t compare to recent other martial arts films such as Ong Bak 2. We are forced to stay in the dark, and dull our enjoyment of the festivities. It is obvious that McTeigue is going for is an homage to martial arts flicks. If this isn’t apparent by the final fight scene played out in a fiery death trap then you just haven’t seen enough of this genre.

If you are big fan of martial arts films and you’ve already watched Ong Bak, then Ninja Assassin might fill the hole in your heart (no matter which side it might be on). There is some shoddy leaps in logic, and some absurd story elements. Somehow the film never quite makes any of what it does fun. There is nothing more thrilling to me than seeing a great martial arts sequence,  but this one just never made my heart jump.

Ninja Assassin is a follow up film for James McTeigue to the superb V for Vendetta and he has successfully burned the majority of his street cred with this awful mess.

Based around a rouge assassin from a secret society of ninja clans we get a two pronged tale that eventually runs into each other.  One follows the fore mentioned assassin, Raizo, who is avoiding multiple threats on his life and the other is an investigation by a young female agent, Mika, at Europol that is uncovering the alleged ninja assassin clan.  All of this is inter cut with flashbacks to Raizo’s past and upbringing through the clan system and these are without a doubt the most interesting aspects of the film; probably because we can actually see what is happening, more on that later though.

The ninja clan would take young children and orphans and train them to become ninjas that were farmed out for political killings and so forth.  Raizo was always special and watching him train and form a connection with a young girl is about the only compelling thing that happens in the film and in fact works quite well for the most part.  The brutal treatment and unflinching nature of some of the image with children is not something we usually see in most pictures and while a tad brutal still felt fresh.  Sadly the rest of the film doesn’t live up to these portions of the film, which weren’t anything incredible to write home about on their own accord.

Now, I understand ninjas are supposed to be invisible and undetectable, that is their skill, but the viewers should be able to see them right?  But we don’t most of the time and while the film is full of these elaborate fight scenes that seem kind of cool, I can’t really tell because you can’t see what is going on 90% of the time in the fight scenes.  All of a sudden a non-ninja gets an arm chopped off or a ninja falls out of the darkness after being shot by a lucky police officers bullet.  The ninjas actually seem almost too good and are untouchable for the most part, until the bombastic ending in which the somehow are easily blown out of the shadows and are weaklings running away which was a bit odd.  It’s a shame too because McTeigue did have the balls to kind of go all out and dedicate a large portion of the film to action, which is what an action film should do, but isn’t that fun when we can’t see it.  Fans of nineties style action films will feel right at home with this picture though as it feels decidedly old school in style and tone mixed in with modern effects and ridiculous gore.

There is also a small hint of fantasy added to the picture and I really couldn’t buy into that either, from the healing to the quick disappearing into the shadows.  The more grounded and realistic this film is the better it was, i.e. the origins, and these attempts to make the ninjas more powerful than humans rather than the hardest working made little sense.

The actors in the film are all laughable as well with Rain’s work being a step down from his acceptable turn in Speed Racer.  The rest of the cast is full of faces I barely recognize and rightfully so as most of them turn in some awful work to go along with awful dialogue for them to spout out.  Asian stereotypes also squeak into the picture on a number of occasions and I can’t help but wonder what this really helps or appeals to, other than the offending of a number of people.

In the end, Ninja Assassin is a complete waste of time and a poor, poor, effort from an already proven director.  McTeigue has some interesting ideas but and an exciting premise but manages to kill any excitement or thrills with a terrible script and action that is completely undecipherable.  A ninja movie should be far cooler than this and the flashback sequences showed they had at least a solid groundwork to build from, sadly it didn’t pan out.  This is a rental at best for action junkies, but like I said, I don’t think there is even a lot for them to enjoy as you can’t see anything.

Ninja Assassin is an F