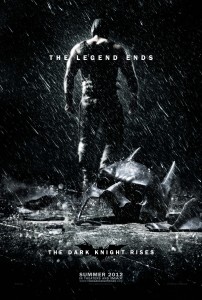 This poster speaks perfectly to the newest trailer. Bane is in control, and Batman is broken.

The third trailer for Christopher Nolan’s The Dark Knight Rises was released yesterday, just in time to be played before Marvel’s The Avengers opens Friday.

This trailer reveals the most we have have seen about the conclusion to Nolan’s epic Batman trilogy. We get to see more of Bane than we have seen up until this point, and get to hear him talk throughout most of the trailer. It appears that Bane has the upper hand for most of the movie, so it will be interesting to see how everything goes down.

What we see in the trailer

Bane is being transported by the military via airplane, when he escapes midair after the plane is hijacked. We see bane talking to Bruce Wayne, where he asks, “What are you?” Bane answers, “I’m Gothom’s reckoning.” We see Gothom being destroyed in a series of chaotic scenes, including the football field collapsing that we’ve seen before, a subway tunnel collapsing, and a bridge collapsing.

We see Bruce Wayne in what appears to be a prison jumpsuit during a number of shots, leading us to believe that Batman will be missing for a good part of the movie. Either Bruce Wayne is put in prison by Baye, or Batman has been revealed and put in prison for the “murder” of Harvey Dent that occurred 8 years earlier. I would have to go with the former, seeing as though it appears there is more chaos to deal with in Gotham than that – but it could be before Bane takes over.

About half way through the trailer Joseph Gorden Levett’s character John Blake asks Selina Kyle, “Did they kill him?” She answers, “I’m not sure.” We see Bruce Wayne asking Bane, “Why didn’t you just kill me?” Bane answers, “Your punishment must be more severe.” We see Bane walking in the sewer with Batman’s broken cowl, which is tossed into the water. We then see John Bayne punched in the face by Bane, and roll down a huge hill – not sure what that is all about, but it doesn’t look good.

Alfred tells Bruce Wayne, “I won’t bury you. I’ve buried enough members of the Wayne Family.” Catwoman tells Batman, “You don’t owe these people any more. You’ve given them everything.” To this Batman responds, “Not everything. Not yet.” This implies that Batman will die at the end of the film. I certainly hope not however, as I just can’t imagine a Batman move ending with him dying at the end. This is going to be Nolan’s last Batman film, so that means that this is going to shape the way the entire series is remembered. Whatever happens, the film looks like it’s going to be incredible – I just hope it doesn’t mean Batman has to die.

Toward the end of the trailer we see Selina Kyle in prison, wearing a bright orange jumpsuit. It looks like she is going to escape from at situation pretty quick though, as she uses another prisoners hands sticking outside their cell to somehow catapult her into some sort of flip. We see a lot of Batman and Bane fighting toward the end of the trailer, which looks like it is going to be pretty awesome.

Last, we see Catwoman and Batman in the Batmobile where she says, “My mother warned me about getting into cars with strange men.” To that Batman replies, “This isn’t a car,” and it lifts into the air like some sort of hover craft. Awesome.

Watch the brand new third trailer for The Dark Knight Rises in 1080p HD below: