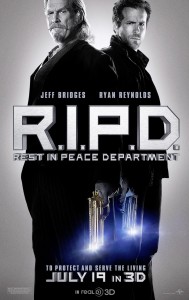 At first glance you might think that R.I.P.D., which stands for the “Rest in Peace Department,” looks like a Men in Black knockoff. It is easy to see how you would jump to the conclusion after watching the trailer for the Dark Horse Comic Book adaptation. Sure, the main characters are a team comprised of a young hot shot and an experienced elder. And they are dealing with extraordinary criminals. But these bad guys aren’t aliens – they are dead.

Synopsis: A recently slain cop joins a team of undead police officers working for the Rest in Peace Department and tries to find the man who murdered him.

The film stars Ryan Reynolds and Jeff Bridges as the main duo, as well as Kevin Bacon, Mary-Louise Parker, Robert Knepper, James Hong, and Mike O’Malley. The film is directed by Robert Schwentke, who helmed Red. The film is set to be released July 19, 2013 in RealD 3D.

Watch the trailer for R.I.P.D.: