New Kids On The Block 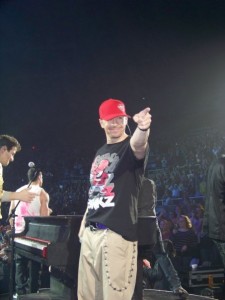 I was surrounded by thousands of women, ages between 28 to 36. Dressed in their old late eighties clothing, as well as t–shirts and jean jackets with over-sized pins. It all took me back to 1988, when I first saw New Kids on The Block.

I have seen New Kids a few times before they broke up in the early 90’s. This was the first time my wife had gone to see them. We waited for them to go on. Here is a Step by Step if you will of our concert Experience.

The lights go out and a huge video screen starts playing all kinds of old footage of the New Kids. The the Guys Rise up from a platform like the boy band that they are, and launch into one of their new songs “Single.” This goes into a mixture of oldies including “Right Stuff” and my favorite girl. Then comes “Didn’t I blow your Mind”. With this being a slow song, they went into “Please Don’t Go Girl,” which Sounds off key but is now in a new range so Joey can hit the Notes.

Next the Kids brought the energy back up a few notches, and did “Grown Man,” which is a new Track with the Pussy Cat Dolls’ Nicole Scherzinger (Nicole is on the big screen in this duet). At this point Donnie has become the chattiest by far. Then Donnie asked everyone how his ass looks, and of course all the women cheered.

The came the song “Games,” a testosterone packed chant song, during which they drove home the song’s theme by flashing Images of their favorite Boston sports figures on the screen. Danny also broke out with some great break dancing moves.

After this high level song they calmed down a little, and did “if you go away,” sitting on different levels of the stairs. They parlayed this song into a tribute to the fallen salute to stars and family members that have been lost throughout the years. There was a great tribute to Danny’s mother Betty, who passed away from Breast Cancer. 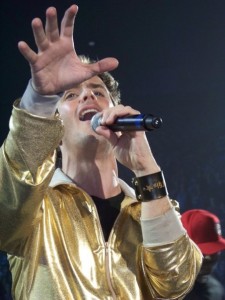 At this point, we are barley to the half way point of the show. Honest.

The New Kids then move off the main stage, and jump onto a rotating stage with a piano (right in front of my wife and I). The first song up for this stage is “tonight,” probably one of their last hits around 20 years ago. They really get into acting with the crowd, from grabbing beers to grabbing cameras and taking the pictures of themselves. Donnie then starts throwing out towels to the crowd. The next song is “2 in the Morning” and the stage begins to rise up and continues to rotate. Then comes “Dirty Dancing,” which features dancers gyrating with the Kids on the piano.

Then it was back onto the main stage. Joey and Donnie come out and sing “Twisted,” where the music continues to play after the song ends and we get to see Joey show off his Dancing With the Stars season 1 talent. Joey also sings a few of his single hits.

On to the Jordan Singles, starting with “Baby I believe in You.” With his white button down shirt open, flapping in the wind to show off his abs, he moves on to “Give it to You” where he danced with the other dancers.

Then it came time for Donnie to do more talking. He talked a lot about how he loved St. Louis and how is was here trying to find another bride. He then launched into “Cover Girl” with a different take – more of a Rock edge. Donnie gyrated until his pants hung lower to revel his drawers.

Then comes “I Be Loving You” – at this point the guys have changed into all white for a timeless 1988 feel. Smoke rolling out from their feet added to the heavenly, dreamy feel as Jordan nailed it. 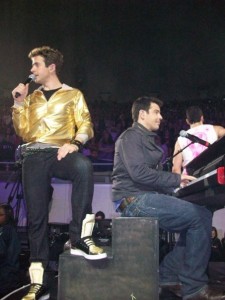 After this Donnie started basically talking about how everyone is having a great time, and how this makes them feel young again. He went on saying that not that we are old, but this helps them to go back, which was a way to lead into “Summertime” and then on to “Click Click Click”. The Kids then leave the stage and all the lights go out. The Video Screen comes on with a Celtics player yelling “are you ready?!”

For the encore the kids come out with Step by Step, Hanging Tough, and We Will Rock you.

Did the Kids have all the Right stuff? Most of the time. Some of their moves were a bit slower then in ’88. Less stepping and more sliding. Did anyone leave disappointed? Doubtful. True, they don’t have the moves of 20 years ago, but Joey and Jordan can still hit the high notes, Donnie can still charm the pants off the crowd, Danny still has the dance moves, and even Jon has come out of his shell a little bit. I don’t think the crowd would’ve cared if the guys would have come and stood in front of them and sang, but instead they performed their asses off for two and a half hours. With just the right mix of their swoony ‘80s ballads, the tough guy anthems, and the well – mixed new Dance – pop. My wife and I were exhausted just watching, and being drawn into the performance.

I give the concert performance and all around 3 and a half stars out of four. So guys, take your wives. They will highly enjoy this trip down memory lane, and you will enjoy the performance.