New HD Trailer for Dreamworks’ RISE OF THE GUARDIANS 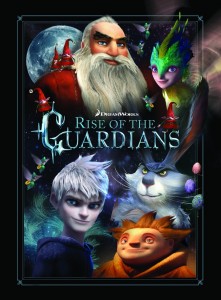 Dreamworks has released its newest trailer for Rise of the Guardians, shedding more light on the actual plot of the animated film from the first. Jack Frost (Chris Pine) is recruited by Santa (Alec Baldwin), the Easter Bunny (Hugh Jackman), Tooth Fairy (Isla Fisher) and the Sandman to rescue the world from darkness by the evil Pitch (Jude Law).

The visual effects are stunning and the story looks well thought out. With the cast Dreamworks assembled, it should be a fantastically fun film for kids as well as adults. Sadly, the release date has been pushed back to November 21, 2012 to avoid competition with Twilight’s Breaking Dawn and Monsters University.

Synopsis:
RISE OF THE GUARDIANS is an epic & magical adventure that tells the story of Santa Claus, the Easter Bunny, the Tooth Fairy, the Sandman, and Jack Frost – legendary characters with previously unknown extraordinary abilities. When an evil spirit known as Pitch lays down the gauntlet to take over the world, the immortal Guardians must join forces to protect the hopes, beliefs and imagination of children everywhere.

Watch the HD trailer for RISE OF THE GUARDIANS below: