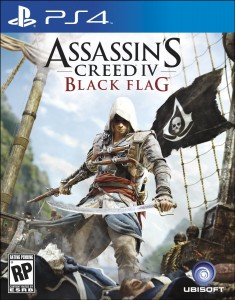 The demo follows Edward Kenway as he accepts a mission to assassinate 2 targets. Those of you who will remember, this is something from the first Assassin’s Creed game – and a feature promised in the many interviews with Ubisoft. In the trailer, we see the way the game handles the seamless transition from land to ship to sea to land. You also get to see how treasure hunting works and the dynamic weather system that’s been put into place.

Video Decription: Watch 13 Minutes of Caribbean Open-World Gameplay with commentary from game director Ashraf Ismail. Gain insights directly from the development team on all that’s new to explore in the vast, diverse Caribbean open world such as hunting for lost treasures in uncharted islands or brand new naval features, including upgrading the Jackdaw with new weaponry and recruiting your crew to conquer new enemy ships at sea.

No shark footage though. Come on Ubisoft, give the people what they really want.