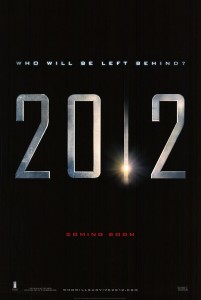 Check out this new scene released by Columbia Pictures from the new Roland Emmerich disaster pic 2012.

Disaster movie maven Roland Emmerich (Independence Day, The Day After Tomorrow) crafts this apocalyptic sci-fi thriller following an academic researcher who opens a portal into a parallel universe, making contact with his double in an effort to prevent the catastrophic prophecies of the ancient Mayan calendar from coming to pass. According to the Mayan calendar, the world will come to an end on December 21, 2012. When a global cataclysm thrusts the world into chaos, divorced writer and father Jackson Curtis (John Cusack) uses his knowledge of the ancient prophecies to ensure that the human race is not completely wiped out. Chiwetel Ejiofor, Danny Glover, Amanda Peet, Thandie Newton, and Oliver Platt round out the cast of this end-of-the-world thriller co-scripted by the director and his 10,000 B.C. writer/composer, Harald Kloser.

Well, it looks just as over the top as Emmerich’s other pieces of work. I don’t know if it is lack of imagination, but I have trouble suspending my disbelief that anyone could make it to Santa Monica that quick.