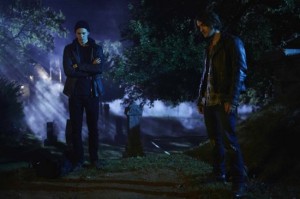 Call me a sucker if you want, but I can’t stop watching Netflix’s Hemlock Grove. It’s my Sunday ritual. That’s probably a good thing, because after some of the things that are brought to light in episodes 3-6, I felt like I needed to go to church.

Now don’t get me wrong, there are still plenty of drawn out, boring parts filled with horrible dialogue, but overall, the pace is quickened.

Roman and Peter have ended their friendship, as Peter has grown tired of Roman’s law breaking ways. Roman, upset that his only friend has turned his back on him, begins to lose his mind and do some not-so-nice things to an unlucky girl. He also continues his pattern from episode one, of cutting himself with razors.

Gore fans will not be disappointed, as we get a dismembered body, plenty of vomit, and a pretty brutal beheading of a werewolf.

Roman’s mother, Olivia, continues her whorish ways, as she continues to have an affair with her dead husband’s brother. She also makes a pact with Peter’s gypsy mother to buy some type of potion she has been drinking. My guess is that this potion prevents her from turning into a werewolf.

Roman is not happy at the end of episode six, when he finds out that Peter is sleeping with his cousin Letha. Oh, it’s important to remember that Letha is also pregnant. She still believes an angel impregnated her. There’s no doubt that the baby she is carrying is either going to turn out to be very hairy or the virgin Mary.

Finally, the best character and most interesting on the show is Shelley, Roman’s sister. She’s the 6’8 monstrous looking girl who grunts, glows from touch, and uses an iPhone to speak. I hope you are still with me! Only time will tell what purpose she serves in the series. She is in constant contact with her uncle. Remember, he’s sleeping with her mother. Will she turn out to be a monster or save the day?

All in all, the series has turned out to be very enjoyable. It has several different storylines that will hopefully come together in the end. I think the best part is, I have absolutely no clue what is going to happen. I guess I will just have to continue watching.