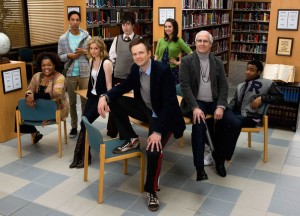 Community tells the story of Jeff (Joel McHale)  a suspended lawyer who must enroll in the local community college to not get disbarred. To get the attention of a girl named Britta (Gillian Jacobs) he tells a lie of a Spanish study group to get closer to her.  Unfortunately for him, she invites the socially awkward Abed (Danny Pudi) to the study group as well, who in turn invites more people. When left up to his own machinations he tries to score the test answers from a friend who works for the college, Duncan (John Oliver). Although, without ruining the pilot for you, something works out in the end where he needs his study group.

There is a lot in this pilot that works, and a lot that doesn’t. It’s very hard to introduce this many characters in a half hour time slot. Not only do you have to introduce the characters, but you have to introduce the premise. The premise is probably the most shallow part of the pilot as well.  We are given almost no back story on our main character, Jeff, except the fact that he has a serpent’s tongue and his degree was less than valid. The rest is just left up to assumption, which makes the character seem very flat at first. Luckily McHale has a good charisma about him. If you have ever watched him on E!’s The Soup then you know he has great comedic timing and a great likability to him. Without him the character of Jeff would probably come off as too smug and the pilot wouldn’t succeed at all.

We are introduced to most of the cast through a round table (or square in this case) discussion during the study group. There is one obvious stand out in the whole group, Danny Pudi as Abed steals almost every scene he is in. From his recitation of a speech from The Breakfast Club to all of his incredibly funny speeches he is the funniest person in the pilot. I suspect we will continue to see more of him similar to how we have seen more of Jim Parson’s Sheldon on Big Bang Theory. It’s hard not to laugh at a socially awkward nerd.

The rest of the cast really don’t get their time to shine. Chevy Chase’s character, Pierce, is reduced to a few lines that really don’t have much impact other than showing what an incredible creep he is going to play. You can see the potential in the character, as long as Chase doesn’t over do the role. Donald Glover as Troy also shows some good potential as the high school jock who just can’t seem to get over the fact that he is no longer the big man on campus.  Everyone else is given so little to do in the pilot that you don’t walk away with much, and you will find yourself forgetting them quite quickly.

It isn’t that the pilot isn’t enjoyable, it just isn’t engaging enough. Most likely this will be rectified throughout the series, and the full personalities of the characters will slowly brighten throughout the series. The pilot is really just a way for us to get to know the main character and see why the other cast around him might be willing to trust his judgment, even though he isn’t a particularly nice guy.

I’ve watched a few clips from the rest of the season, and it looks like there is a lot of funny moments to come. Ken Jeong is set to play the Spanish teacher and he is one of the fastest rising comedic talents out right now.  Some of the cast might be going a bit higher profile as well too. Donald Glover is the star of Mystery Team, a comedy which is getting a lot of buzz and might end up being a break out hit later this year.

Overall, Community is a very funny show that hopefully will be fleshed out a bit more over the season. It has some of the best potential of comedy pilot I’ve seen in the past couple years. Let’s hope it can find its groove so I can add another show to my DVR.

Community gets a B.

WATCH THE PILOT IN HD HERE!