Unlike most people, I don’t hold a grudge against mindless action flicks. In fact, some of my favorite movies are epic action films that don’t require a whole lot of thought involved. When I heard that a sequel to Clash of the Titans was being made, I figured I’d give it a try. The original film was a bit of a letdown (well, everywhere but the bank accounts of the producers), but the trailers for Wrath were chock full of action, and ancient Greek mythology has such an extensive, interweaving story, plus the lovely Rosamund Pike I figured, how could they screw this up? 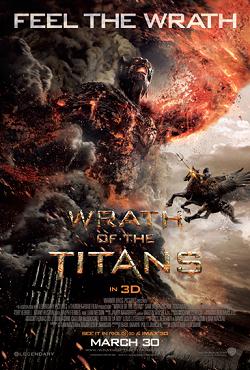 All I can think now is: touché, film gods.

The film picks up ten years after the events of Clash. Perseus (Sam Worthington), the half-god child of Zeus (Liam Neeson), is living contently as a fisherman, raising his son Helios in a time of peace.

Fear not, though, for you did not get those 3D glasses just to see a contemplative demi-god sailing by the bay. It seems that Zeus’ brother Hades (Ralph Fiennes) is bent on resurrecting Kronos, father to Hades, Zeus, and Poseidon (Danny Huston).

For those of you who aren’t up to speed on your ancient Greek mythology, the Titans were the offspring of Gaia and Uranus and the parents of the gods. Kronos was the leader of the Titans before they were overthrown.
Zeus attempts to persuade Perseus to come with him to stop Hades, but Perseus, content with his life and son, stays behind. Zeus and Poseidon together head to the underworld, where they meet with Ares, son of Zeus, who betrays the two and sides with Hades. Zeus is captured and his power is slowly drained to bring back Kronos.
Perseus, meanwhile, embarks on the quest to find Poseidon’s demi-god son, Agenor (Toby Kebbell), who can help guide him on the way. Along the way, he meets up with queen Andromeda (Pike), who accompanies them in their journey to find Hephaestus (Bill Nighy), the blacksmith of the gods, who can help them defeat Kronos.
First off, out of curiosity, why is it that nowadays, they cast primarily English actors to play Greeks? How many Greek guys did you see in the movie 300? What about Clash of the Titans? Or this movie? Look at all the actors above that I listed. One of them is American (Huston), and Worthington is Australian, but was born in England.
That fact doesn’t destroy the movie, though, nor do the special effects, which are outstanding. Wrath makes heavy use of 3D effects, and they’re overall pretty remarkable. The sound is well done, and the production values on the aesthetics of the film are top-notch.
So, it looks pretty. The rest of the film, as in the plot and story, are its Achilles’ heel (pardon me). This is a film that requires absolutely zero thought or emotion from the viewer. Now, before you castigate me and call me an idiot, like I said, I have no problem with a film that is reliant on non-stop action and humor. This film has that, but everything is so transparent and blatantly obvious it takes a lot of the enjoyment out of the film. Instead of Perseus figuring out on his own exactly what he needs to do, thankfully Zeus is there as a how-to guide to tell him what to do. In addition, the story is loosely taken from Greek mythology, but the whole story feels like a re-tread of other movies. Now, one could argue that essentially EVERY story nowadays is taken from the Greek or Roman anthologies, and that’s a valid argument, but at one point, I felt like I was in the middle of an ancient Star Wars re-tread.
On top of that, the acting isn’t too great, but then again the script doesn’t really give the actors too much to work with. Kebbell is somewhat effective at times as the comic relief, but he’s a clone of every humorous wingman from a thousand movies. Pike, Worthington, Neeson…none of them show too much emotion, other than possibly relief when the movie’s over.
I went with my buddy Andy, who said he felt the first film was better. There were, however, other guys in the screening who felt the second was much better. Wrath of the Titans isn’t a terrible movie, but it isn’t anything original that’s going to be remembered down the road other than for its visceral visual effects. If you liked the first film, give it a chance; otherwise, there are better things waiting just beyond the horizon.
Wrath of the Titans gets a C-.
Facebook Comments Box