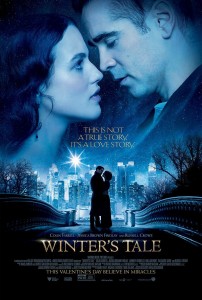 While Valentine’s Day may mean chocolate, stuffed animals and little trinkets for most couples – others may choose to see one of the many “love story” movies that the studios put out every year. Now we can say, for the most part, that a lot of these movies are pretty run-of-the-mill generic. I wasn’t too thrilled about some of the options available this year, but Winter’s Tale did peak my interest, mainly due to its impressive cast—Russell Crowe, Colin Farrell and a few others I will choose to omit for the sake of the surprise and plot of the movie.

Winter’s Tale does a respectable job at trying to pull you into its romanticized, magical version of New York City. This isn’t like the New York you and I know. No. This is one that’s populated by magic that people are used to. It’s really the only explanation I have for the way people seem NOT to react to flying horses and demon faces. The movie follows an orphan, Peter Lake, played by the always likeable Colin Farrell. Lake’s had a rough life; he never knew his loving parents, he had to steal to survive and he hated hurting people to do so. That last character trait has put him into a risky situation with his former employer and all around evil thug, Pearly Soames, portrayed by the charismatic Russell Crowe.

Crowe makes an excellent antagonist to Lake (Pearly is the perfect name of this villain, by the way). You can tell there is some great history between these two characters, unfortunately the relationship is never explored further, it’s given way to the more important theme of this movie—miracles and love.

Lake ends up running into Beverly Penn—who’s dying of Consumption—as he’s trying to rob her house and they end up falling love. Yes, your read that right: they end up madly in love in a few short hours after he was caught trying to rob her family’s swanky New York City home. Now, I’m not talking “Oh hey, I really like you type love,” I’m talking more like “Let me invite you my lake mansion where my entire upper-class family is, I’m sure they’ll take kindly to me being in love with a thief type love.” This is where I felt the film began to fall apart, the romantic courting between these two felt rushed and uninspired. There’s really nothing that happens between these two that can warrant that kind of connection, but we’ll look past it for the sake of the two hour runtime the movie has.

In the way these movies work, Beverly and Lake’s romance is thwarted by Pearly, who thinks Beverly is Lake’s “miracle” i.e., he’s meant to save her from death. What follows is the better part of the movie, we see the love the two have for each other, some meaningful character relationships build, all to be cut short by the actions of menacing and evil character. Then, the movie AGAIN falls flat as events transpire that are given no real explanation. Certain things happen more for the sake of the plot than for making sense. The audience is left to just accept these things, rather than have the film give us a decent explanation.

I did like the closing act of the movie, it put a nice twist on what the entire movie was about, but there are just too many holes and character short sights that prevented from really drawing me in. The world is intriguing, but never explained. The characters are interesting, but never fleshed out. The overall theme of the movie did leave me feeling happy—that our love can transpire time to help those truly in need—and for a Valentine’s Day release, I’m guessing that’s exactly what they were aiming for.