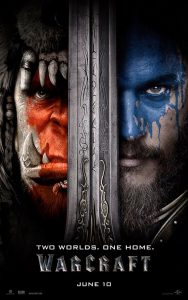 It’s no secret that movies based on video/computer games have never fared too well. Just glancing through the list of movies, the various Rotten Tomatoes scores read more like a senior class’s ACT scores than a rating. The mere mention of the name Uwe Boll makes film critics and video game players alike cringe in sheer terror. Year in and year out, we watched as some of our favorite game franchises (Tomb Raider, Hitman, DOOM, Far Cry) were butchered in various manners. One game-based film franchise, Resident Evil, has managed to do well enough to warrant several sequels, but it’s the exception rather than the rule.

And now we have Warcraft, the latest effort from Duncan Jones, whose directorial debut was the phenomenal indie film Moon. Jones, the son of David Bowie, tackled a certainly risky endeavor. The original Warcraft game, along with Warcraft II, were nothing short of revolutionary when they were released, helping kick-start the real-time strategy genre. With the subsequent release of World of Warcraft, the most popular MMO of all-time, Blizzard’s flagship franchise, the collective eyes of the gaming world descended upon Jones’s effort. Ten years after the project was initially announced, the result is here. The result is an entertaining, if not flawed, fantasy.

Set in the timeline of the RTS games, the Orc homeworld of Draenor is slowly dying. In an effort to find a new home, Gul’dan (Daniel Wu), an Orc warlord, is able to open a portal to the world of Azeroth. To open the portal requires life to be drained from living beings, so an initial scouting force is sent through the portal to gather more lives so they can keep the portal open long enough to send the rest of the Orcs through. This force includes Durotan (Toby Kebbell), the leader of the Frostwolf clan, along with his pregnant wife, (Anna Galvin), his friend Orgrim (Robert Kazinsky), and Garona (Paula Patton). Leading the force under Gul’dan is Blackhand (Clancy Brown), one of the physically strongest Orc warriors and a ruthless but capable leader.

In Azeroth, King Llane Wrynn (Dominic Cooper) gets word of the initial raids and sends his commander, Anduin Lothar (Travis Fimmel), to seek the assistance of Medivh (Ben Foster), the archmage Guardian of Azeroth. Caught up in the middle of this is Khadgar (Ben Schnetzer), a young mage who left his formal training but still retains much of his power. They discover Gul’dan is using a magic called fel, a powerful but corruptive and destructive magic, and seek to stop him before it’s too late.