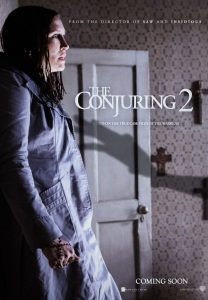 Just when it looked like sequels were going to scare everyone away from the movie theater, along comes The Conjuring 2 – and it literally scared some out of the theater.

James Wan’s latest effort is not just a great scariest, it’s a great piece of acting, as Patrick Wilson and Vera Farmiga have great chemistry together.

After seeing the sequel to 2013’s surprise hit, it was hard to go to sleep. Make no mistake about it, the based on a true story sequel, delivers on all cylinders. Once again, The Conjuring 2 proves that you don’t need gore and guts to put a legitimate scare into moviegoers.

Wilson and Farming play Ed and Lorraine Warren, real-life paranormal investigators. This film picks up around six years after the first.

The film begins with the pair earning worldwide notoriety for their work with he Amityville house, yes, the Amityville Horror house from the famed film.

Lorraine is exhausted from the work, and begins seeing horrific visions of a demon dressed as a nun. The pair begin to consider ending their paranormal quests. Unfortunately, as the pair contemplate retirement, their most famous case begins to unfold in the London Borough of Enfield in England.

Peggy Hodgson, mother of four children, begins to find things are becoming scarier and scarier, as her home is plagued by a demon.

The presence particularly targets Hodgson’s daughter Janet, who finds herself waking up in the living room instead of her bedroom to being bitten and terrorized by the demon.

When the case begins to garner attention, the Catholic Church calls on Ed and Lorraine to hopefully prove it’s a hoax, or rid the house of the demonic presence.

Sequels can be tricky fare, as many fall into the same tricks as the first film. Luckily, Wan doesn’t allow this to happen in The Conjuring 2. The “true” element lends an uneasy feeling to the film, while the scares are relatively unexpected.

Wilson and Farmiga also bring a new element into the second film, as the Warren’s relationship is put on display, which adds to the film.

Wan shows that he is at the top of the horror-game. I personally think there is no one better than Wan. While the director could have rested on cheap scares, he uses to the “true” element to add to the creepiness of the film.

Make no mistake about it, The Conjuring 2 is just as good, if not better than the first film. Between Wan’s stellar directing, Wilson and Farmiga’s chemistry, and and a great story, the film is a must see for film-goers.

The Conjuring 2 gets an A-