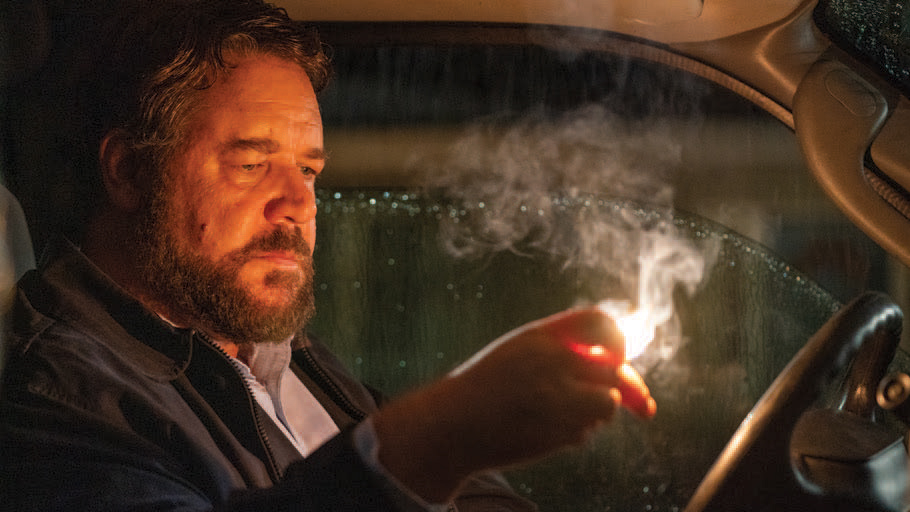 Make no mistake about it, Russell Crowe’s latest film is a horror movie.

In UNHINGED, Crowe plays a violent sociopath who thinks the world has it out for him, and decides that he wants others to understand his pain. His unsuspecting victim comes in the form of Rachel (Caren Pistorius), a struggling mother going through a bad divorce and trying to do the best she can by her family. While having a terrible day of her own, she ends up in the wrong-place at the wrong-time – laying on her car’s horn at Crowe’s character who is parked at a green light. After refusing to apologize (she was in the right, after all), the violent man decides to make her life a living hell.

Not unlike famous horror characters – Jason, Michael Myers, Freddy, etc. – Crowe’s character stalks his prey and kills all of those around her. No matter where she escapes to, or what she does, there he is – ready to attack at every turn.

While the aforementioned horror icons don’t necessarily need an explanation of how or why they do what they do, Crowe’s villain uses technology and good ol’ fashioned road rage to carry out most of his heinous crimes. While on paper, it seems like an easy escape in a vehicle with a cell phone – but the script puts a lot of thought into trapping Rachel into her situation. He’s always one step ahead, making it impossible for his “final girl” to get away.

The film is often times disturbing, and simply put – gross. But that’s how it wants the audience to feel. Crowe’s character is appalling, sick, and everything that is wrong with the toxic mindset that plagues society – especially online. He truly feels that everyone is out to get him, and plays the victim – meanwhile inflicting as much pain and suffering on others. The film doesn’t need you to side with him, or expect you to. He is wrong, and that’s why you are rooting for Rachel the entire time. But like a good horror movie, there are plenty of chills and thrills along the way.

Crowe is terrifying as the crazed villain – genuinely scary and believable as someone who might actually exist in the real world. Not only a great actor with a commanding presence, but he says so much with his eyes. While his actions are inexcusable, it definitely makes you think twice about who you might take your frustrations out on.

Pistorius is fantastic as the frantic mother, desperate to escape her stalker and protect her family. Her fear is palpable, and her determination just as strong. She’s excellent throughout, and also has one of the best one-liners I’ve heard in a long time.

One of the most impressive feats of the film is all of the practical effects when it comes to destruction on the road. Numerous cars are crashed, rolled, smashed – complete chaos and destruction as the film goes on. Hats off to the stunt coordinators and drivers who made it all possible. The vehicle chases are thrilling, and it’s always nice to see filmmakers avoiding CGI where possible.

UNHINGED is a down and dirty horror movie disguised as a thriller, and delivers enough action and chills to make it worth a watch. Sometimes it’s nice to check your brain at the door, sit back, and enjoy an exciting movie that doesn’t make you think too hard. With a modern take on a classic formula, it’s worth your time for some nerve-wracking suspense.