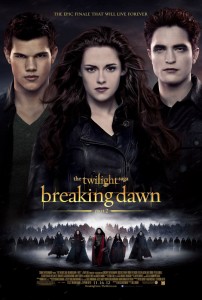 In the weeks leading up to the release of the final ‘Twilight’ film, I have heard a myriad of mixed emotions. Some are happy it is finally here; half because they can’t wait to see it, while the other half are ecstatic it is over. Others are sad that there will be no more films in the beloved franchise. I fall into the category that always gives The Twilight Saga the benefit of the doubt, and goes into each film with an open mind. I thought the first film was pretty bad, yet intriguing. I also thought that every film that was subsequently released was better than the last. Unfortunately, The Twilight Saga: Breaking Dawn – Part 2 is not only completely unnecessary – but is just downright awful.

When we last left Edward (Robert Pattinson) and Bella (Kristen Stewart), the two lovebirds were experiencing the troubled birth of their half-human, half-vampire child Renesmee. The baby was born, and with no foreseeable complications – other than the uncertainty of what it will become. In order for Bella to survive giving birth to such a child, Edward had to turn her into a vampire – something that Bella has wanted for some time. The happy vampire family now has everything they want to make their lives complete. But trouble in paradise arises when the Volturi, the vampire equivalent to the Mob lead by Aro (Michael Sheen), Caius (Jamie Campbell Bower) and Marcus (Christopher Heyerdahl), catch wind of the child. The Cullen clan fears that the Volturi will not listen to reason, and will exterminate them all due to fear of the unknown child. In an effort to protect Renesmee, they gather support from around the world in order to make witnesses of other Vampires that can attest they have broken no laws. But the question at hand is whether or not it will be enough to convince the Volturi of their innocence.

Right from the beginning of the film, everything about the second part of Breaking Dawn is terrible. You can’t even get past the opening credits without cringing at how awful they were thrown together. It looks like they were trying to rip off HBO’s ‘True Blood’ while creating a mash-up of images and title credits, but it just ends up looking a mess. After that abomination we get our first glance of Edward and Bella after her transformation and the birth of their child, where probably ten minutes of awkward staring and romance feels like an eternity. The pacing is so off that you can’t help to feel bored. And what is supposed to be the first real action in the film just ends up looking extremely cheesy, when Bella and Edward run through the forest at super speeds to hunt Bella’s first kill. The first part of Breaking Dawn alone made almost three-quarters of a billion dollars, and you are telling me that this franchise still cannot afford decent special effects? At this point it is simply inexcusable, and it is obvious that the filmmakers care nothing more than to produce a cash cow. All of this is only in about the first fifteen minutes of the film, and never gets any better.

The acting in the film is just as good / terrible (depending on how you look at it) as it is in the other films in the franchise. By now we know the characters, and all the same players are back to finish out the saga. We know what to expect from Pattinson and Stewart, so I think we are pretty much immune to the awkward stares and lip biting by now. But something in me hopes that with experience will be better acting. But I am disappointed once again, whether it is due to the performances or the source material. It is hard to say, but probably a combination of both. The better actors of the film are the ones you hardly ever see, like Billy Burke as Charlie Swan or Peter Facinelli as Carlisle Cullen. Ashley Greene is another actor that is a pleasure to see on-screen, but she is probably in ten minutes total of the latest film.

The main problem I have with Breaking Dawn – Part 2 is not even the actors, or the special effects. We know what we are getting into when we go to the theater to see a ‘Twilight’ film, so there are really no surprises there. The worst part of the film is that virtually nothing happens. Sure, you can argue that there is a plot point here or there, necessary to establish certain characters and events. But you have to remember that this is the second part of one film, and it is one that could have easily been edited down to thirty minutes and stuck on the end of the first part. With as little as happens in the latter part, it is obvious that this is nothing other than a blatant cash grab by the studio. They know that this is the last film in the series, and they found a way to milk another billion dollars out of it. The first four films have made over $2.5 billion dollars internationally, and this one is sure to make at least another $750 million. That is the only reason this film exists on it’s own. And because nothing really happens until the very end, it is extremely boring to sit through. And the little action we see is still not enough to redeem it.

I can honestly say that I don’t hate the The Twilight Saga. I didn’t go into Breaking Dawn – Part 2 wanting to hate it, but that is exactly what happened. They didn’t even make a glimmer of an effort to win over the guys in this one, and instead spent a ludicrous amount of time with lovey-dovey scenes which only intention could be to fulfill some “Fifty Shades of Grey” fantasy instead of moving the plot along. From an artistic standpoint, some scenes should have been cut from ‘Part 1’ and edited with the most crucial plot points of ‘Part 2’ – and been kept as one film. Instead, the franchise comes to an end with the worst made and most certainly unneccesary film of them all.

The Twilight Saga: Breaking Dawn – Part 2 is a D-