Movie Review: THE ART OF GETTING By Starring Emma Roberts, Freddie Highmore 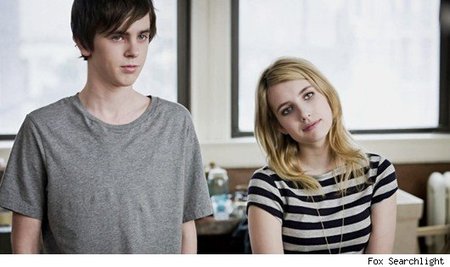 There are very few films now-a-days that you can go into completely blind.  Between magazines, television, and internet one is bound to see something about a movie before it hit theaters.  But THE ART OF GETTING BY was a rare opportunity where I was doing just that.  Seeing the film without knowing a single thing aside from the fact it starred Emma Roberts and Freddie Highmore.  Now normally this would be a very good thing.  I had no expectations or judgements walking into the film, but it did not matter for this one.  Within twenty minutes I was looking at my watch thinking “Clock move faster!”

The story is about George.  George has recently almost given up on life.  He says he has more important things to think about other than school so he just draws in all of his text books.  He just does not see the point in working hard everyday because in the end we all die alone.  George finds an unlikely friendship with Sally who is very pretty and popular on the outside.  But inside George and Sally may be more alike than one would assume.  Through their friendship George discovers a new view on life.

I have a lot of issues with the film, but I will start with the fact that it seems there is a good hour and a half of missing film here.  George goes to an expensive prep school in New York.  There is absolutely no way that this school would let him continue to take a free ride through classes day to day.  The plot summary on IMDB says he has never really had to work a day in his life.  The how did he even make it to his senior year at this school.  Next, there is no way any girl, in this case Sally, would bring a guy home to their sexually aggressive mother the first day they hang out.  Back to Sally, I feel like I never really got to know her.  Suddenly, she is close friends with George and you think this girl is kind of those quirky loner type as well.  Then, you discover she is actually one of the most popular girls in school and dated one of the pretty boys.  Just seems like a huge character shift.

As you can tell, I had some issues with the script.  But some films can overcome this with solid leads that lift the film up.  Despite his wardrobe and solemn approach, I just couldn’t buy into Freddie Highmore as a slacker, emo kid.  Until late in the film, he shows no real emotion and I just felt like he was reciting lines.  And Emma Roberts was the same way for me at times.  There are moments where I can see her falling into the character and being in the situation.  then other teams it just feels so forced and like she is dishing out lines.  I know this is not entirely their faults because they were not given much to work with.  But I just never bought into their characters or relationship.

As much as the film wanted to be a good indie film, it just fell short on almost every level.  I honestly can not even recommend this film to the 13-18 crowd that the film is aimed towards.  It is certainly not the worst film I have ever seen, but there is a good chance it could end up on my ten worst of the year.