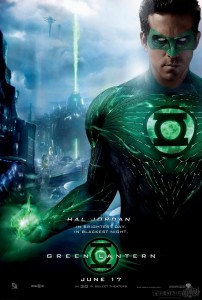 I have to admit that growing up, Green Lantern was not my favorite superhero. I tend to lean more towards the Marvel universe, with Batman almost evening things out on the DC side. So I wasn’t quite sure of what to expect of a “Green Lantern” movie starring Ryan Reynolds and Blake Lively. But I was pleasantly surprised to find the film exceeded my expectations, but it was a lot of fun.

Hal Jordan (Ryan Reynolds) is a test pilot who loves to push the boundaries, and doesn’t play by anybody else’s rules. He and his childhood sweetheart, Carol Ferris (Blake Lively), have one of the most important flights of Ferris Aerospace’s history, to land a major government contract. But when Hal pulls a cocky stunt that almost gets him and the contract killed, he narrowly escapes becoming unemployed.

On the other side of the universe, Hal is unaware that there are thousands of sectors – earth included – that are protected by a group of peace keepers called the Green Lantern Corps. These superheroes are each given rings that allow them to will anything that their minds’ can imagine. When an unknown threat named Parallax appears and threatens to destroy the Green Lanterns and their sectors, Earth’s protector Abin Sur is killed and a new Lantern must be chosen. That Lantern is Hal. For the first time ever, a human has been chosen and Hal must prove himself to the other Green Lanterns and overcome his fears.

If you are thinking that it sounds like there is a lot of story going on, you are absolutely correct. There is a lot to explain in a short amount of time to get this series up and going. But I was incredibly impressed with how well this film did it. Right from the beginning, the universe and all of its sectors are explained, and we are introduced to the Lanterns and their purpose. We see that Paralax poses a threat unlike any the Lantern’s have seen, and that even Abin Sur – a highly regarded hero – is no match for its power. Hal is thrown into this world as abruptly as we are, and it is easy to relate with his ignorance as he gets a crash course in becoming a Green Lantern.

One of the things I always dread these days before seeing a big action movie is having to watch it in 3D. This film was no different, as I figured it would be more of a distraction to add to the mess that the movie could have been. However, I saw right away that this was not the case. The 3D and special effects were very well done, and were anything but a distraction. I thought that for the most part, it gave the film a good perception of depth and made the special effects stand out pretty well. Luckily they didn’t go with many “in your face,” gimmicky shots – so I thank them for that.

The fact that Ryan Reynolds was to play Hal Jordan in the lead of “Green Lantern” didn’t make me feel any better about it. Reynolds is primarily known for his comedic roles, which lead me to believe that it would be hard to take the film seriously. But the affect was actually quite the opposite, as his charisma and wit added a lot more depth to the character and made him more interesting than expected. Reynolds felt like a natural in the role, and proved that he really could pull off the action hero better than his attempts in the past. Another surprise was Blake Lively, best known for her role in “Gossip Girl.” Usually I don’t think that she can act her way out of a paper bag, but I didn’t mind her too much in this movie as Hal’s love interest. She played the character well, and it was enjoyable to see her giving Reynolds a run for his money.

The standout actor in the film by far was Peter Sarsgaard. He plays Hector Hammond, one of Hal and Carol’s childhood friends, who is now a scientist and professor. His character is a loner, and a bit creepy, and Sarsgaard knocks it out of the park. I have been a big fan of his for quite some time now, and it is great to see him get a big role in a summer blockbuster like this. It means we should be seeing a lot more from the talented actor, who was great in films like “An Education,” “Jarhead,” and a personal favorite of mine – “Garden State.”

I think that “Green Lantern” is a film that will make most fans of the comic happy, while get newcomers excited for what’s to come. The movie keeps the pace moving with a lot of great action and special effects. I found the story to be really interesting, and I thought they did a great job packing everything into an hour and forty-five minutes. Although it has a hard time standing up against more serious movies this summer, like “X-Men: First Class,” it makes a great popcorn flick.

“Green Lantern” is a B