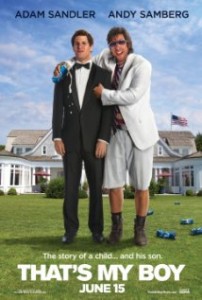 There has never been an Adam Sandler film I have ever been excited about.  I caught Happy Gilmore on HBO when I was younger, but that is the extent of my toleration of his films.  This is very important to note because if you are a fan of his brand of comedy and have liked his past films, you are probably going to enjoy this film.  But if you are like me, you may chuckle at a couple one liners but spend most of your time looking at your watch seeing when this is going to end.

Donny (Sandler) slept with his teacher when he was 13.  Not only did Donny become a media sensation once him and his teacher were discovered, but he also became a father as a result.  Years later, Donny owes money to the government for not paying taxes, and he has no way of getting it.  But he discovers that his son Todd (Samberg) is a big time financial analyst with one of the biggest weddings of the year coming up in a couple of days.

That is the basic premise, and I am willing to bet that just about anyone can write the conclusion of this film right now.  Every character arc is so predictable.  While sometimes this isn’t a problem because the viewer actually cares about the characters, I could have cared less about anyone who was on the screen.

Let’s look past the characters you don’t care about and see if the story can redeem the film.  On the surface, it appears this film was a good idea.  “The Hangover was good.  Let’s do a wedding.  Let’s do a lot of foul mouthed language.  Let’s do an old star that is no longer relevant but could be funny (in this case Vanilla Ice).  Let’s do a lot of crude humor.”  This is what I could hear a couple writers saying as they created this script.  Unfortunately for them, the film is just not that funny.  It is just trying way too hard.

I would imagine that for a 13 year old this film would be pretty awesome.  The problem is that the 13 year olds are not going to be getting into the theater without their parents.  And I would imagine (hope) that most parents would not take their kids to see this.  But unfortunately this is a society that propels Grown Ups to get a sequel.  So while I highly encourage you not to see this, I know that the film will come in #1 at the box office regardless.  Which kills me that more people will see this than saw John Carter (I just watched it on DVD again, it’s still a good movie).  If you thought the trailer was hilarious then go see this because you will love it.  I am sorry.