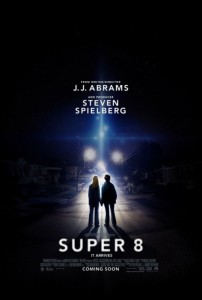 Over a year ago when I first saw the teaser for SUPER 8, I immediately got a huge grin on my face.  I was so excited.  I wanted to know why the truck crashed into the train.  I wanted to know why the train was traveling across the country.  I wanted to know what was in the train.  I immediately had flashes of when I saw the CLOVERFIELD teaser for the first time and thought “What the F***?!”  While SUPER 8 is certainly a better film, CLOVERFIELD was more exciting for me to watch.  SUPER 8 is very well made and a great homage to Spielberg and Amblin, but it lacks creativity to a point that I just didn’t care as much as it wanted me to.

In 1979, a group of young kids are making a movie filmed on their super 8 camera.  Charles is the passionate director who recruits all of his friends to help him to make it including his best friend Joe and the class cutie, Alice.  One night while filming at an old train station on the outskirts of town, Joe witnesses a truck swerve onto the tracks in front of a train.  Within minutes the military is in town trying to cover up everything.  But strange things start happening in town that the kids begin to question.

The cast in this film is outstanding.  Kyle Chandler plays Joe’s father to perfection.  Exactly the type of father you have either had or know someone who does have.  He struggles to connect with his son while trying to do his job to the best of his ability.  You completely believe the character, his emotions, and his struggles.  While Chandler shines, it’s really the kids who steal the show.  Aside from Elle Fanning, who most only know from her sister, all of the kids are unknowns which makes it that much more enjoyable.  It feels like you are watching a group of friends who have known each other their whole lives. It left me just wanting to watch a movie about these kids doing anything together.  I didn’t even care about everything that was going on around them.

It’s hard for me to complain about this film because I immediately hear what all of those people who love the film are going to say.  JJ Abrams set out to make a homage to Spielberg and Amblin.  These are the films he grew up with and loved, and he always wanted to make a film just like it.  Well he accomplished his goal.  He made a film that will take you back to STAND BY ME, CLOSE ENCOUNTERS OF THE THIRD KIND, and ET.  And that’s the problem I have with it.  Because it’s Abrams I expected much more creativity.  But the story plays by the numbers.  No huge surprises.

SUPER 8 is not a bad film by any means.  As I said before, the kids are amazing and worth watching the film.  The set piece involving the train crash is pretty spectacular.  But  don’t go in expecting a mind blowing experience that changes this genre of films.  Also, be warned, Abrams is obsessed with lens flares.  Even more so than he was in STAR TREK.