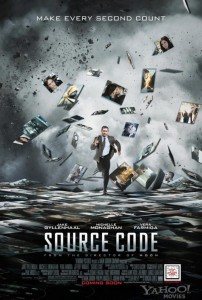 “Source Code” is director Duncan Jones’ second feature length film, which once again really pulls the audience into it. Following the success of his 2009 debut “Moon,” Jones brings us back to earth – this time on a Chicago commuter train. But only for 8 minutes at a time, over and over again. And we can’t wait to get back on.

Captain Colter Stevens (Jake Gyllenhaal) suddenly wakes up on an unknown train, traveling with passengers he doesn’t know and for reasons just as mysterious. After a few minutes of speaking with the woman he is supposedly traveling with (Michelle Monaghan), he finds that he is controlling the body of an unknown man. After waking up from what appears to be some sort of training exercise, he finds that he is a part of a government experiment called “Source Code,”where he has the ability to relive the last 8 minutes of another person’s life. His mission is to investigate a life threatening attack on the city of Chicago – the first target several being the train. He must relive the event over and over, finding any clue he can that might lead the government to stop the attacker before destroying their next target.

During the film, which was shot on a train that was custom built for filming, Jones keeps things interesting by filming scenes from different angles and creatively editing. It is easy to follow exactly what Gyllenhaal’s character is going through, without feeling like you are watching the same thing over and over. The movie is like “Groundhog’s Day” meets “The Matrix,” and it is fantastic. The audience knows just as little about the experiment as the main character, and keeps them guessing from beginning to end.

Gyllenhaal does a great job in the lead of this cerebral thriller. He has proven himself as a leading man over the years, but this film reaffirms that he can do something different and really make it work on-screen. In “Source Code,” he is thrown into an experiment in a state of confusion, while the clock is ticking and millions of lives are depending on him. Gyllenhaal allows the audience to really connect with the character, and bring us into his state of mind. Also along for the ride is Vera Farmiga, who communicates with his character via video to wherever he is I between source code initializations. Her character is in charge of making sure his mission goes smoothly, and ensuring that he doesn’t stop until he finds the bomber. Farmiga has a really likable quality and plays the calm and collected officer well.

There is plenty of action as you might imagine, seeing as about every 8 minutes or so the train is about to explode. It’s hard not to anticipate the bomb going off each time, as you are on the edge of your seat waiting for it to happen. The film keeps a quick pace, and it is easy for an hour and thirty five minutes to go by real fast.

There is definitely something to say about a movie that takes place almost entirely in one location, and never fails to keep the audience’s attention. “Source Code” is that type of movie. From the time things start off, you feel like you are right there on the train – trying to figure out what is going on. And it’s one hell of a fun ride to be taken on. Duncan Jones has once again proven himself as an excellent director, and this will surely be his ticket for many big projects to come. If you are looking for the best movie of 2011 so far – look no further. This is it.

“Source Code is an A”