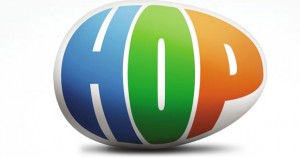 Hop tells the story of E.B., the son of the Easter Bunny. E.B. is next in line to inherit the title, but his aspirations of being a rock and roll drummer are more important to him than traveling the world to give sugary confections to all the good little boys and girls. E.B. chances upon Fred O’ Hare, played by James Marsen, who similarly isn’t quite living up to his fathers expectations. As a child Fred saw the Easter Bunny in his sleigh…yeah, and ever since has been convinced of the fact that the Easter Bunny is real. Now in his late 20’s, Fred has been living at home for a year after being laid off and just cant seem to find the right job, even after multiple offers. It should also be noted that in the first lines of the film, Fred tells the viewers that he is the newest Easter Bunny…way to spoil the ending.

First off, Marsden is actually 37 years old and is playing a character in his late 20’s, but that’s the least of this films’ problems. While mildly humorous as a whole, Hop is so bizarre and inexcusably lazy that the negatives wash away any of the films’ positives. Hopefully you noticed the part earlier where the Easter Bunny flies to every house in the world (except China, as the movie points out) in a sleigh powered by little yellow chicks. A sleigh. The entire movie is nothing more than a Christmas movie wearing an Easter suit. Literally from start to finish, all the major plot points and conventions are pulled from any generic Christmas movie. It takes most of it’s story from The Santa Clause and doesn’t do much to improve it. Add in jelly bean poop, a talent contest judged by David Hasselhoff and the oddest cameo ever in a children’s movie, Chelsea Handler playing a video game executive and the movie just gets worse and worse. Those three parts alone seem more like a bad exercise in Mad Libs, than legitimate story elements.

Perhaps oddest of all is their understanding of the Easter holiday. In Hop, the North Pole is substituted with Easter Island as home base for the Easter Bunny and his crew. And what is even odder is that as a holiday that is generally considered to be Christian in nature these days, the filmmakers actually go out of their way to state that the Easter Bunny has been doing his thing for over 4000 years; presumably leaving the pagan history of Easter to be the influence of this movie.

Russell Brand, who voices E.B., keeps Hop from being totally unwatchable. His ability to mix sweetness with humor is the bright spot on this bleak landscape. The problem with converting a Christmas movie to an Easter movie is that Christmas movies rely so much on the warm feelings of the “Christmas spirit” to distract us from what would otherwise be a 90-minute piece of crap. Save your money and save your children from thinking that this is acceptable filmmaking and skip Hop.