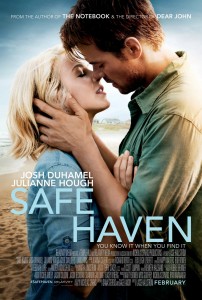 Lasse Hallström and Nicholas Sparks are back together again after their first outing together, Dear John just three years ago. All the things you’ve come to expect from a Nicholas Sparks film are there. The beautiful North Carolina set pieces, the tragic back stories, and forced drama all make appearances. That isn’t to say there aren’t some bright points, and that it won’t be pleasing to it’s audience. In fact, Safe Haven will be another critically panned film that resonates with a female audience.

Katie (Julianne Hough) is on the run. She’s done something that requires her to quickly get out of Boston with the help of a neighbor, all while in hot pursuit by Detective Kevin Tierney (David Lyons). She makes her escape by bus down the east coast, and on a whim stops at the cozy coastline town of Southport, North Carolina. She finds her feet quickly, making a new friend Jo (Cobie Smulders), a new job as a waitress, and a new place that is conservatively defined as a “fixer upper”. To top it all of she meets Alex (Josh Duhamel), the widowed owner of the local general store in Southport, and quickly takes to his daughter. Even with a bumpy start, the two eventually hit it off. After letting her guard down, some of Katie’s past starts to come back and haunt her.

Safe Haven has a couple twists, neither of them are totally surprising due to the amount of context clues the film throws at you. Neither twist is particularly satisfying, and in fact both are kind of hokey. Sparks films take what could be a fine romance film, and add pieces of suspense that don’t match tonally with the rest of the story. Without spoiling the film, the final twist of the film is something so out of place that it jars the whole film out of context.

Julianne Hough is toned down compared to her previous roles, but is limited by the range of emotions. She’s taken lessons from the Kristen Stewart School of Drama, and throughout the first half of the film equates anxiety with faces that resemble someone with need of a higher fiber diet. As her character opens up a bit, so does she, but never to the heights that will convince anyone she deserves to be in a film better than this.

Josh Duhamel continues to be an enigma. He exudes charm in every film, but never seems to fully connect with the audience or his female co-stars. There is no doubt he is extremely easy to relate to, but as he has played this character before, it’s time he should master it. It should be noted that he does a better job than David Lyons who chews the scenery as the detective searching for Katie. Not that the production helps him out, by making him the sweatiest drunk person to ever roam the earth.

Lasse Halstrom has taken a confusing career path with deciding to concentrate on two Sparks films in a row. Just a number of years ago he was experiencing a lot of success with The Cider House Rules, Chocolat, and What’s Eating Gilbert Grape. He’s now been reduced to a genre romance director who apparently still knows how to make a film with some appealing visuals, but doesn’t fully explore the characters he’s been given.

Nicholas Sparks’ fans will no doubt enjoy this. It isn’t The Notebook, but it’s a date night movie most women will enjoy if they can make it through the first slow half.