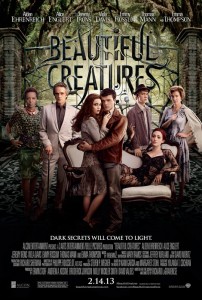 When I first saw the preview for Beautiful Creatures, I was very intrigued. I have not read the young adult book that it is adapted from, so I automatically thought it looked like a Twilight type of film – since they do have some similarities. As I am a fan of the “Twilight” books, I thought this would have that teenage-love-story type of feel that I enjoy.

Beautiful Creatures is set in the small town of Gatlin, South Carolina where nothing changes. Ethan Wate (Alden Ehrenreich), a high school junior, wants nothing more than to get out of this small town and see the world. But his life turns upside down when a mysterious girl, Lena Duchannes (Alice Englert), becomes the “new girl” at his high school. Ethan is intrigued by Lena and very quickly finds out that she belongs to a family of castors aka witches. You would think that he would run the other direction, but the exact opposite happened. Ethan accepts her heritage but things get more complicated because Lena’s sixteenth birthday is approaching quickly. With that being said, when a female castor becomes sixteen their powers are either claimed for the light or the dark. Lena has her odds against her because of a family curse. Ethan and Lena spend the rest of the movie trying to find a way to prevent her from turning evil. Things aren’t looking so good for their relationship since immortals such as Lena should not be involved with mortals. With a few discoveries and a surprising twist the ending leaves you with a few “fill in the blanks”  to figure out.

I was disappointed to have a few things untold by the movie. It does make you want read the book, in order to find answers to some of the questions it leaves you with. There were a few things mentioned that seemed like they were important, yet they didn’t elaborate on them at all. That always bothers me in a film. I thought that having Lena only 15 turning 16 and being full fledged in love was a bit unrealistic. They should have made her at least a couple of years older. But then again, it showed that they really did share “true love” at such a young age.

Ethan Wate, played by Alden Ehrenreich, is a very likable character; he is charismatic and warmhearted. He didn’t care what obstacles he had to face to be with the one he loved. Even though everyone else in town stayed away from Lena, Ethan stood by her. Lena Duchannes, played by Alice Englert, is a quiet and tense girl in Beautiful Creatures. I didn’t connect with her character until she fell in love with Ethan. At that point she started acting like a typical girl in love, and became more relatable. She didn’t care what people thought of her, as long as Ethan was by her side. They connected beautifully and it was a pure and sweet romance that they shared together. Englert and Ehrenreich had great chemistry together. I’ve never seen anything with either of the actors, so it was nice not knowing what to expect from the two of them. Overall, I was pleasantly surprised.

The special effects definitely could have been better, but I didn’t have too high of expectations for this one. Your typical computer generated effects look exactly like what they are, and tend to stick out a bit. There were a few parts where i had to just shake my head and say “oh, come on.”

I would say that Beautiful Creatures is definitely geared toward the younger female audience. If you enjoy to watch any type of love story with super natural elements involved, you most defiantly will not be disappointed with this one.

Beautiful Creatures is a B-