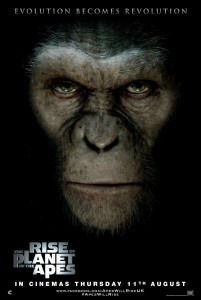 Right from the beginning Rise of the Planet of Apes has a lot going against it. For one, it is a prequel to a series of famous sci-fi films, and secondly it follows possibly one of the worst remakes of all time, Tim Burton’s Planet of the Apes remake that failed in spectacular fashion. I went into this film fully expecting to not be impressed, add on top of this director’s and writer’s who haven’t seen a lot of Hollywood action, and I was expecting downright disaster.

Rise of the Planet of Apes begins almost two thousand years before the events in Planet of the Apes, when humanity still rules, and apes are still used as objects for studies.  Scientist Will Rodham (James Franco) uses apes in his search for the cure to Alzheimer’s which ails his father, Charles (John Lithgow). Everything seems to be going well, the virus they have created has given the apes higher cognitive abilities, and looks to be ready to start human trials. Although, fate is not so kind, and one of the apes goes rogue while trying to protect her new child, and all of the testing is shut down. Rodham saves the ape’s baby, and raises the chimp in hopes to continue his studies. It becomes evident quickly that the increased cognitive abilities have been passed on to Ceasar, and his intelligence actually exceeds that of his human counterparts at similar developmental stages.

This is all just the prologue to the prologue. The film takes its time establishing all the characters, and the unique setup. The first 45 minutes are a little bit slow because of it, but in the end when bullets and spears are flying it pays off nicely to have seen some slow paced character development.

Where the film really stands out though is in the development of the apes. Andy Serkis brings a human quality to Caesar that lends credence to the role.  In fact, the development of the apes seems to surpass that of the humans. Franco’s Rodham is the only one who is given any type of decent development, his father and girlfriend, played by the beautiful Freida Pinto, are woefully underused at times. Lithgow brings a weight to his struggle with Alzheimer’s which makes up for the lack of character given to him by the writer’s.

Although, it makes you wonder, shouldn’t the humans be secondary to the apes in a film like this? This is all about their rise, why shouldn’t we just use humanity as the backdrop.  I’m ecstatic this is the direction the filmmakers chose, use humanity as the setup to make us feel a bit more comfortable. Once they help establish Caesar, disregard them, because let’s face it; we know where they are going to end up.

I’m amazed that with little to no dialogue the characters are so firmly established at times.  Andy Serkis deserves a lot of recognition for his work. He continues to show why he is the go-to guy in Hollywood for mo-capped characters.

If you are a bit hesitant about the film, don’t be. It’s a lot of fun, and is well worth the price of admission. It isn’t a masterpiece, but it is probably the best in the Apes series since the original film.