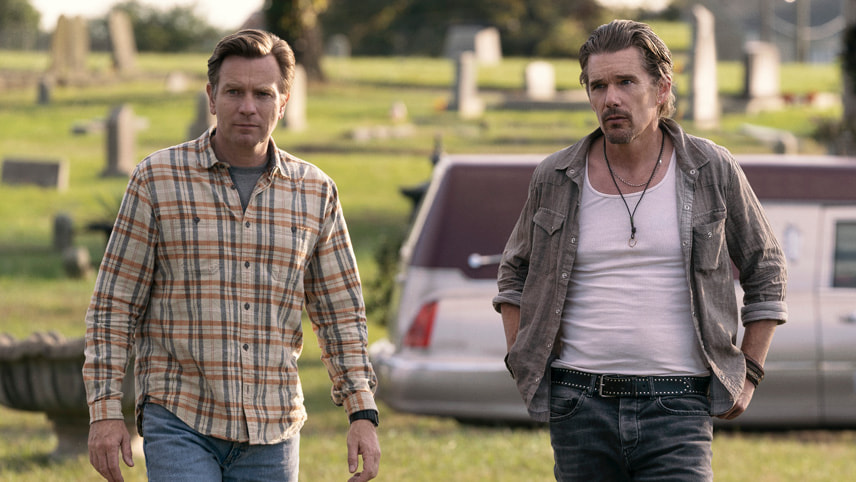 How do you say goodbye to someone you hate?

I mean, in most cases, you don’t. If you see them in public, you’ll likely try to avoid them, unless you’re in a pugilistic mood and feel like confronting them.

But what if that person is your father, and he’s passed away and specifically requested you be at the funeral? That’s the question posed to Ewan McGregor and Ethan Hawke, the eponymous leads in Raymond and Ray, the latest film from Colombian writer/director Rodrigo García. I have to admit I wasn’t too familiar with much of his work (he has directed episodes of TV series such as “The Sopranos” and “Six Feet Under”), but I’m a pretty big fan of McGregor and Hawke, so I was looking forward to seeing them together on-screen.

Raymond (McGregor) and Ray (Hawke) are half-brothers who share the same father. Although they were close-knit as children, they’ve since drifted apart: Raymond prefers a structured lifestyle and has had several marriages, while Ray is more of a drifter who lost his wife to cancer and struggles to hold jobs. When Raymond shows up at Ray’s door and asks Ray to accompany him to their father’s funeral, Ray is hesitant; it’s immediately made clear that their father was extremely abusive (as a final act, he asked that Raymond and Ray alone dig his grave). As they arrive in town and begin to sort through his belongings and his final days, they begin to remember and realize there was a lot more to his life and their time together.

While McGregor and Hawke bring a viable amount of starpower to the film (they both turn in solid performances in their perspective roles), this idea isn’t necessarily anything new. In an effort to liven things up, García tries to introduce some surprises throughout the film, be it people making choices out of character or attempting to inject some levity into otherwise serious moments. And it works…at times. There are some genuinely powerful moments and a few instances that made me chuckle.

But far too often there are stretches of tedium or instances where the moments just fall flat. The supporting cast doesn’t stand out, but I don’t think that’s their fault; Maribel Verdú and Sophie Okonedo do fine with what they’re given, but they just aren’t given enough. Raymond and Ray go through some pretty substantial development in the film, but it almost seems forced and rather predictable in the end.

It isn’t a terrible film, and if you’re a fan of either McGregor or Hawke, you may get something out of it. The fact that it’s readily available to stream on Apple TV+ is a positive as well. But I can’t recommend going out of your way to see Raymond and Ray; it’s been done before, and it’s been done better.