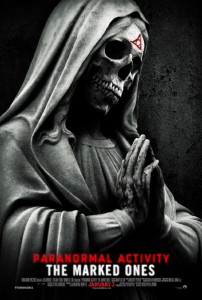 Just a few days into 2014, and I already have a nomination for worst movie of the year. Yes, that is how bad Paranormal Activity: The Marked Ones is.

Where the first PA seemed original and fresh, the last couple entries have stale, but they have showed glimpses of promise by adding to the story from the original film. The fifth entry into the series, The Marked Ones takes an almost all Latino cast, and attempts to take the franchise in a new direction. The only direction this entry will take audiences is to the bottom of the barrel. There is absolutely no originality or anything fresh with this latest entry into the franchise.

The latest PA starts out at a high school graduation, as we see the valedictorian and his friends whooping it up, celebrating the end of high school. As the party rolls on, the hand held footage reveals a not-so-normal neighbor who is ultimately murdered. Following the murder, the group of teens decides to investigate the apartment of the deceased woman. You would think that the police would have made sure the apartment was locked up tight, but it seems like the group of teens were able to easily get in the apartment. Once in the apartment, strange things start to happen to the main character Josh.

There is absolutely nothing scary about the film, besides the fact that it is being released in theaters. It’s a total waste of 84 minutes. As I sat watching the film, I wondered where it was going to tie into the original. It’s not until the end, where we get the tie-in. At that point, I was so pissed off that this illogical, stupid film was made, I wanted to walk out. The tie-in to the original character Katie (Kate Featherstone) is so lazily done, it just made me angry.

I admit that I wasn’t expecting anything groundbreaking with the new PA, but I did have some expectations of some cheap scares and a decent story. Neither of those expectations were met. This film brings nothing original to the table. There is not a single scary scene in the movie. I would advise avoiding this film at all cost. It’s a clear that the producers are scraping the bottom of the barrel in this installment of PA. The only link to the other films is the grainy, hand-held camera footage. Other than that, there is absolutely no resemblance of the original film. In a time of year when there are so many  great movies to choose from, do yourself a favor and forget about Paranormal Activity The Marked Ones. You will save yourself a nightmare of sitting through this horror of a film.

Paranormal Activity: The Marked Ones gets an F.