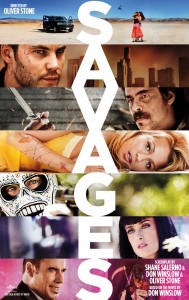 Oliver Stone returns to his roots, with subject matter somewhat reminiscent of Scarface and Natural Born Killers. But Savages is unique enough to stand on its own, not fitting perfectly into one genre or the other. And that is what makes this vivid, beautifully filmed tale of two naive California drug lords who take on a drug cartel so great.

Peace-loving Ben (Aaron Johnson) and ex-soldier Chon (Taylor Kitsch) are two young entrepreneurs who have cornered the marijuana market in Laguna Beach. The two of them are completely different, but share one thing in common – a woman. O (Blake Lively) loves both of her men equally, and they love her back with all that they have. Because of their strengths, she says that together they make one whole man. Their perfect ménage lifestyle is disrupted when Ben and Chon decline the invitation to share their botany secrets with a Mexian drug empire headed by Elena (Salma Hayek). Kidnapped and held captive by Elena’s right-hand man Lado (Benicio Del Toro), O’s only hope to see the loves of her life again is that they will cooperate with the cartel. But Elena and her muscle underestimate the two of them, who are willing to do whatever it takes to save the women they love.

The style of the film reminds me of a cross between True Romance and Point Break. Most of the story takes place around the peaceful beaches of California, and is narrated by O – reminiscent of the way that Alabama Worley tells her story. While the film has its fair share of violence, it isn’t unnecessary like it can be in some. Ben and Chon have been running their business while sheltered from the violence that revolves around the world of crime and drugs. Their fairy-tale lifestyle is disrupted once they say “no” to the cartel, who expects only one answer when they ask you to do something. The way their tranquil way of life is instantly turned upside down is apparent once O is kidnapped, and it is obvious that the two main characters will do anything to get her back.

The two leads in the film are fantastic in their roles. I thought that Taylor Kitsch was much more charismatic and likable than he was in Battleship (although I did enjoy his performance in John Carter). Chon is ex-military, and an all-around badass who doesn’t think twice about putting his life on the line. He has done it before fighting in Iraq and Afghanistan, and he doesn’t hesitate to do it again for O. Aaron Johnson, who has grown tremendously as an actor since Kick-Ass and Nowhere Boy is great as Ben. His character, who is peaceful and caring, doesn’t want anything to do with the cartel and their violence. But when push comes to shove, Chon helps him to become the man he has to be to save O. And seeing that transformation is fun to watch happen.

I felt that Blake Lively’s Ophelia, or O as she is referred to most of the film, was a bit monotone and dull. But there was something extremely intriguing about her performance at the same time. Her character is one who grew up with a wealthy mother, who always paid more attention to her future ex-husbands than her daughter. So naturally she rebelled, and ended up where she is with Ben and Chon. She plays the part of a beautiful blonde well enough though, and is the basis for pretty much the entire film.

Salma Hayek was fantastic as Elena, the Queen of the cartel. She never hesitates to put the men who work for her in their places, and is believable in doing so. It is always entertaining to see the rough and tough men who are out killing and committing crimes crumble after a tongue-lashing from the 5 foot 2 inch drug lord. Benicio Del Toro was as creepy and sleezy as it gets as the muscle of the operation. He does an impeccable job of making you hate him as he does everything in his power to take down Ben and Chon.

John Travolta plays Dennis, the dirty FBI agent who you never really know what side he’s on. He is actually quite likable in the role, and is cause of many of the lighter scenes in the movie. His interactions with Ben and Chon, as well as Lado, surprisingly are among some of the most entertaining.

It was nice to see Oliver Stone return to the type of movies that he wrote in the 70s and 80s. Midnight Express is one of my favorite drug movies, and of course Scarface is a classic. With subject matter similar to those two films and the gritty, visceral feeling of Natural Born Killers – Savages has become one of my favorite films this year. The film is shot beautifully, and the story is intriguing from beginning to end. It is one of the most unique films that Stone has put out, and I hope that there are more to come that are like it.

Savages is an A