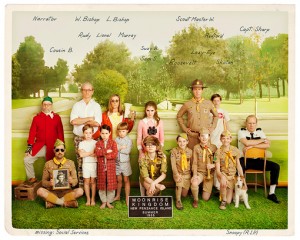 Writer and director Wes Anderson has made a series of films that are every bit his own.  In watching any of these films, it’s easy to see Anderson’s hand crafting the scenes and dialogue.  As a result, his films are not for everyone.  They certainly have an acquired taste that is loved by some (my brother) and loathed by others (my father).  I fall decidedly in between.  I wouldn’t say that any of his films are on my favorites list, but they are still enjoyable.

Moonrise Kingdom was a film that I was willing to see, but I wasn’t ready to rush to the theater and throw down my ten bucks.  While I thought I would enjoy the film, I was quite surprised at how enchanted I became with it.  It is a charming love story that left me smiling for a good majority of its 90 minute run time.

Sam (Jared Gilman) and Suzy (Kara Hayward) quickly become pen pals after a chance encounter backstage at the local church’s production of the story of Noah and the arc.  After many exchanges, they decide to run away together due to both of them having troubled family lives.  Unfortunately, they live on a small island and are soon being searched for by the Khaki Scouts and the local police.  Will their love prevail and will they be able to escape together?

As with every Wes Anderson, the cast here is outstanding.  Bill Murray, Edward Norton, Bruce Willis, Tilda Swinton, Frances McDormand, Harvey Keitel, Bob Balaban, and Jason Schwartzman make up an exceptional supporting cast who never fight to one up one another.  They each have their role and never try to outshine the other.  My personal favorite is Jason Schwartzman’s Cousin Ben who unfortunately does not quite get enough screen time, but he is great with the time that he has.

The real stars are the young lovers.  This is the first acting credit for both Kara Hayward and Jared Gilman, and they blend right in with the rest of the cast seamlessly.  Some may argue that the two seem awkward and not delivering their lines with any real emotion.  If that’s how you feel then I must ask if you have ever seen an Anderson film.  That is how it is meant to be.

It’s hard to recommend a film like this.  As I mentioned at the beginning of the review, some are going to hate it.  Others are going to love it.  It has its own quirky style that some may not be receptive to.  But keep in mind that I am not a Wes Anderson lover, but I did love this film.  If you want a sweet, charming love story that has a lot of humor then this may be for you.  As it stands right now, this is one of my favorite films of the year.