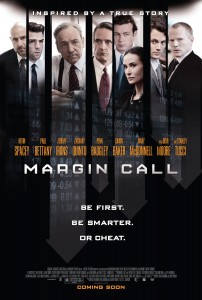 Margin Call is a film that could not have come at a more opportune time. Coming at a time where the Occupy Wall Street protests are in full swing, this engaging film chronicles the first hours of our current financial cluster-fuck. The outstanding cast shines more than any other aspect of this film, however as a whole it is able to take an inherently dry topic and make it interesting.
What is perhaps the most interesting aspect of this film is the cast. Starring Kevin Spacey, Zachary Quinto, Paul Bettany, Jeremy Irons, Demi Moore, Stanley Tucci, Simon Baker and Aasif Mandvi (yeah, from The Daily Show), Margin Call seems to use exclusively “loud” actors. These are not actors that are known for their quiet, subtle performances; and yet they are playing financial analysts – one of the driest, most uncinematic professions in the world. Mainstream audiences will be glad to know that this is not a Glengarry Glen Rosstype of “actors” movie. While it showcases amazing actors, the pace and direction of the film maintains a certain kinetic energy that keeps things interesting.
The faults of the film lie with its intent. As a sort of mockumentary, it works as a chronicling of these events, but it lacks any real insight. We all know Wall Street banks are greedy and that covering the CEO’s ass is more important than keeping working folks employed. While Margin Call doesn’t necessarily have anything new to say, it will certainly resonate with the disaffected choir it is preaching to. Even as polarizing as the current financial climate is, Margin Calltoes the line between ideological views. It’s entertaining enough for everybody to like it (unless you’re a Wall Street Banker) and yet populist enough to not offend anyone.

So if you have any interest in politics or protests or the financial system, you’ll probably find something to identify with in Margin Call. Just don’t expect an educational lesson about the complex causes of our financial meltdown.