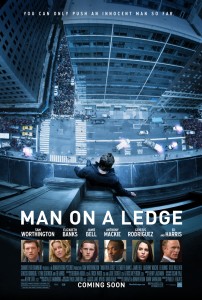 “How far would you go to take down a man who took everything from you?” That is the question that Nick Cassidy (Sam Worthington) asks in Man On A Ledge, the story of an ex-cop convicted of stealing a $40 million dollar diamond from millionaire businessman David Englander (Ed Harris).  With nothing to lose, he climbs onto a ledge near the top of one of Englander’s hotel buildings to prove his innocence to the world.

If you are a fan of films like Inside Man or The Bank Job, you will know exactly what to expect from Man On A Ledge. The film keeps you guessing until the end, and takes you on an exciting ride along the way.  In on Cassidy’s plans are his brother Joey (Jamie Bell) and his girlfriend Angie (Genesis Rodriguez).  If you can suspend your disbelief enough to get past the fact that his two of his accomplices seem to have the training of secret agents when disarming advanced security systems, the trio makes a fun team to watch.  There are a lot of close calls and stressful moments that have you on the edge of your seat, which always makes for a good time for this type of movie.

The film has a great supporting cast, including Elizabeth Banks as Detective Lydia Mercer. Banks plays the negotiator who tries to get Nick off the ledge, requested specifically by him due to her notoriety revolving a recent jumper on the Brooklyn Bridge. The death of the victim, who was a police officer, has made her an outsider on the force – the result of which is many drunken sleepless nights since. Mercer is smart and witty, and knows something is different about Nick. She has to choose whether or not to believe his innocence, and decide if helping him is the right thing to do.  Ed Burns plays Detective Jack Dougherty, who assists Mercer with her crime scene and tries not to get in the way.  Burns doesn’t do anything too special but provides some levity to their predicament. Their back-and-forth banter is fun to watch at times.

Most of the filming was actually done on the ledge of a real building, which is one of the things that makes the movie great. So many films try and use green screens to cut costs and lower risks, but Worthington actually went out on a ledge for the role.  And for a movie that takes place primarily in one location, the story is interesting enough to keep things moving along.  Just trying to guess what Nick was going to do next was half the fun, but you will have to wait until the end to see how it all comes together.

In any movie like this you are going to have parts that are a little over the top.  There were times that things got a little ridiculous, especially towards the end. But overall the “impossible” moments never get bad enough where they negate the whole film.  Man On A Ledge is an entertaining thriller that does exactly what it aims to accomplish. It’s a great popcorn flick to go out on a Friday night and see, and not feel bad about your $12 as you leave the theater.