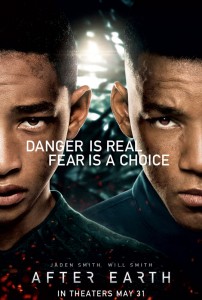 Will Smith returns with his latest sci-fi, ummm…“epic” After Earth, set 1,000 years after humans have abandoned the planet for the safer of confines of Nova Prime. Smith plays a space ranger (but not the Buzz Lightyear kind) whose ship crash lands on the now-forbidden planet. He and his son (played by his real life offspring Jaden Smith) are the only survivors. Having broken both his legs in the crash he is forced to send his ill-prepared son into this brave new world in order to retrieve a beacon that will summon help.

The movie is beyond boring and borderline nonsensical. Creatures on Earth have evolved in our absence but, ummm… it’s only been a thousand years. That’s not exactly how evolution works but ok. Additionally, the bulk of the movie revolves Will Smith being confined to a chair and serving as some sort of parental GPS unit for his son. So we have one of the biggest action stars in the world and he spends the entire film sidelined. Compounding problems is the fact that Jaden Smith’s performance is lackluster at best. He performs the bulk of his scenes alone which is difficult for any actor. But the task proves to be too great for him.

Furthermore the film is suffocated by its on pretention. Smith’s character is named “Cypher Raige”. Hey, guys…I know this sounds crazy but I think that might be a metaphor!!1! And its core message is (Scientology?) psycho-babble. Check out this key piece of dialog:

“Fear is not real. It is a product of thoughts you create. Do not misunderstand me. Danger is very real. But fear is a choice.”

Well, if you want to apply that logic to it then you could say the same about things like “hope” and “love”. I can’t even imagine what this guy’s Valentine’s Day cards must look like.

Somewhere in this mess there’s a backstory about a creature that hurt the Raige family and Cypher had to fend off. It’s a major plot point that is referred to cryptically for the bulk of the film and exists primarily in short, traumatic bursts of flashback for Jaden’s character who witnessed the assault as a small child. Which leads us to our next problem – the film seems to have been made on the cheap. While there are special effects, large swaths of the film are merely Jaden Smith running through the woods. And when our heroes’ aforementioned backstory is finally revealed it comes via Will Smith telling his son what happened. Keep in mind; we’re talking about an epic battle between him and alien monster hell bent on killing him and everyone he loves. And what do we get? An awesome flashback sequence featuring Will Smith kicking alien ass? No. We get an episode of Storytellers. We sit there while Cypher literally describes the film’s central action set-piece. What the hell is going here? Is this a summer blockbuster or Charlie Rose?

But the biggest problem is that Will Smith’s character is, well…kind of a dick. This isn’t the funny and charming Will Smith that moviegoers have come to know and love. He’s arrogant, aloof and condescending. Even when he has his son’s best interests at heart (which honestly is never not the case) he seems to thrive on advising him in the douchiest way possible. And I’m not saying that Will Smith is legally obligated to always play “Will Smith”. But perhaps his attempt to “branch out” shouldn’t come packaged as a big-budget summer popcorn flick that he’s built his career on.

The mistakes and missteps in the movie never stop piling up. And, in case you need another reason to stay away, it’s directed by M. Night Shyamalan. Although, in all fairness, the blame for this movie falls squarely on Will Smith’s shoulders. It’s based on his story. He picked the filmmaking team. He stars in it and he cast his own son as the star. Shymalan just did what he could to assemble the pieces. It’s easily the worst film of Smith’s career.

And, no, I haven’t forgotten about Wild Wild West.

On scale of 1 to 10, with 10 being The Great Santini and 1 being Battlefield Earth, After Earth gets a 3.