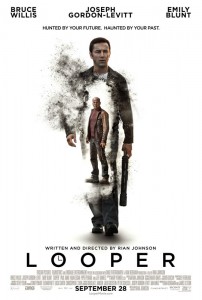 It has been almost 7 years since I first knew that Joseph Gordon-Levitt would be star. I can vividly remember the first time I watched director Rian Johnson’s Brick, which was also the first time I took this incredible actor seriously. Sure, he had been in a handful of movies; but to most of America he was just the kid from 3rd Rock from the Sun. All of that was about to change, and certainly has since the moniker that was once hard to remember has now become a household name. In Looper, JGL and Johnson have finally reunited to make a Sci-Fi film that is nothing short of stellar.

In the year 2072, the mob has found a new way to dispose of bodies – time travel. Abe (Jeff Daniels) has been sent back to 2042 to manage a group of hit men known as loopers. When they want to get rid of a target, they send them back 30 years in the past where they are executed by a looper. The evidence is disposed of where no one would be looking for it, and they get paid in silver – which is strapped to the hit’s body. The only caveat to the job is that the mob eventually decides to “close the loop,” meaning that they send the looper’s future self back 30 years in the past to be executed by them. The looper get’s a golden payday, and is released to live the next 30 years of their life however they please. Joe (Joseph Gordon-Levitt) had a life that was going nowhere before Abe put the gun in his hand. His life was going just as good as he could even have imagined – that is until his loop (Bruce Willis) was sent back in time for him to close.

It is refreshing to see such an original and inventive film like Looper grace the silver screen. So many of the films we see nowadays are recycled, or otherwise predictable around every turn. Even after viewing the trailer, I honestly feel that the idea of a sci-fi mob movie may be hard to grasp. But when you see how beautifully Rian Johnson has executed it, you will wonder how you ever had a doubt.

As we know from Inception, Joseph Gordon-Levitt is no stranger to Sci-Fi. And Bruce Willis – 12 Monkeys, The Fifth Element, Armageddon – enough said. Both actors do an incredible job together on-screen playing the same character separated by time. I can’t say enough about the unbelievable job that make-up effects artist Kazuhiro Tsuji does to make Gordon-Levitt look like a young Willis. Tsuji uses incredibly subtle make-up and prosthetics to make the transformation possible, which I can’t imagine looking realistic had digital effects been used. Beside from their canny resemblance, the two actors share a great chemistry with one another. The advice that an older and wiser Joe gives to his younger self is priceless. And while JGL’s Joe wants nothing but to close his loop and enjoy the next 30 years he was promised, he is no match for his older self – who teaches him the hard way how to mind his elders.

Joseph Gordon-Levitt wasn’t the only one who made a transformation for the film. Emily Blunt plays a single mother and hardened country girl named Sara. She does a 180 from the soft-spoken British woman we know, to a tanned farm girl who doesn’t take crap from anyone. She is almost difficult to recognize, and pulls off the role to a tee. And Pierce Gagnon, who plays Sara’s 10-year-old son Cid, is just plain creepy and menacing – in a good way!

I can safely say with no regrets that Looper is one of the best Sci-Fi films that we have seen in a long time. Rian Johnson’s script and direction is superb, and the result is an action-packed thought provoking film that will hold up well for multiple viewings. Everything from the casting to the special effects are top notch, and make Looper one of the must-see films of the year.

Looper is an A.