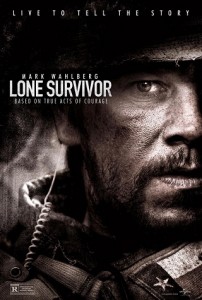 Whatever the reason, I’ve always been a full supporter of our armed forces and am strongly drawn to military films and novels. I consider Saving Private Ryan to be among my favorite films, and I never pass up the opportunity to watch an episode of “Band of Brothers.”

I don’t aim to glamorize war. I do think, though, that those that serve honorably should be appreciated and thanked, and films such as 2012’s Act of Valor along with the aforementioned series “Band of Brothers” do their best to show just how far these men and women will go for each other in the most trying times.

Enter 2014’s Lone Survivor, based on the memoirs of Marcus Luttrell, a Navy SEAL who in 2005 was caught up in a nasty ambush along with three other SEALs during an attempt to capture or kill Ahmad Shah as part of Operation Red Wings. Directed by Peter Berg (who directed two of my favorite movies, Friday Night Lights and the underrated The Kingdom), it’s an efficient exercise in brutality.

Neither decidedly pro- or anti-involvement in Afghanistan, it’s meant to be a glimpse into both the solidarity the SEALs have with each other as well as the absolute hell they experienced that day, and the end result is a fast-paced, effective eulogy for the men who died that day. Along the way, Berg is able to get excellent performances from Mark Wahlberg (who plays SO2 Marcus Luttrell), Emile Hirsch (SO2 Danny Dietz), Ben Foster (SO2 Matt Axelson), and Taylor Kitsch (LT Michael Murphy, who eventually received the Medal of Honor for his actions). The group is a superlative amalgam (in real life, the actors underwent a three-week training regimen together) and it’s interesting to see actors like Kitsch, who starred in the Berg-produced “Friday Night Lights” series as well as Battleship (in which his character receives an invitation to try out for the SEALs…hmm…), and Hirsch, who first caught my attention in The Girl Next Door, make such serious statements.

The heart of the film itself is the battle, which lasts for nearly an hour, during which the team is shot, hit by explosives, and forced to jump down rock-laden cliffs, all of which is shown in full brutal detail. It’s nearly impossible to not cringe at seeing what the team was subjected to not only to survive, but to ensure that the man next to them would survive. The scenes are intentionally jarring, and the director of cinematography, Tobias Schliessler, deserves credit for conveying the desperation and pace of the battle.