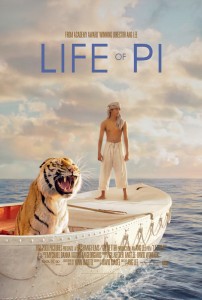 Creativity is a very interesting thing to witness, especially when its in movie form. Ang Lee’s Life of Pi is one of the more quietly intellectual films I’ve seen as of late. The cinematography is fantastic , and use of 3D adds real depth to the film both metaphorically and literally.

I can honestly say I truly enjoyed the film, as it had a very real sense of wonder that is sadly lacking from the majority of movies these days . I found myself attached to the characters – especially the Bengal tiger. I have found that the use of computer generated animals can be a major factor for me when forming an opinion of a movie that features them predominantly. In this aspect, Life of Pi really shines. The animals look fantastically real and extremely life like. This movie makes you take an inward look as to the essence of what separates man from animals, but also makes the connections we share with them seem so real and essential.

Life of Pi is on par with Ang Lee’s past works, and really showcases his creativity as a director. So much so that I would be willing to say this film has the same kind of chances to win an Academy Award that Crouching Tiger Hidden Dragon had back in 2000. The undertones of religious beliefs and small moments of humor make for a heart warming film. The narrator (Pi) has real depth, and makes the story that much better. I should also mention the art direction of this film is the best I’ve seen this year. Life of Pi could easily fit into my top ten movies of 2012.

I would recommend this film to anyone, but should warn you that it does contain some frightening animal violence that might not be suited for children. Overall an A+ film that should most definitely be seen in 3D, and in theaters. Hats off to you Mr. Lee.