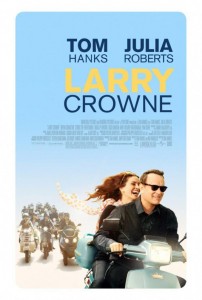 Think back to a decade ago, and you’d be hard pressed to think of two bigger movie stars than Tom Hanks and Julia Roberts. While the two names still command a lot of respect, their box office draw isn’t quite what it used to be. Julia’s draw has gone down as she has taken a number of hiatuses to focus on family life, and Hanks most popular role is as an animated cowboy in a reoccurring series. Not to say he hasn’t had his success (Da Vinci code for example), but they tend to be on less of a grand scale than what occurred in the 90s for him. The question is does getting two 90s eras romantic comedy gods make for a winning formula years later?

Larry Crowne (Tom Hanks) is an all around good guy, he is a good enough employee to pick up trash in the parking lot of his retail job before going into work.  Despite being a worker who gives his all, Larry is downsized, and because he has no college degree the people in the front office believe he has no opportunity for advancement.  Rather that be brought down in to a depressed stupor Larry quickly realizes this is an opportunity to start a degree, since it looks like almost no one is hiring without one anymore.  Larry’s life is immediately changed upon education, he begins to experience life with new friends, new ideas, and most importantly new love.

The problem with Larry Crowne lies far outside the acting, which is solid, but with the cookie cutter plot. Add in some cheesy dialogue, and you have a film that is only saved by the chemistry of the cast. What I found surprising wasn’t just the chemistry between the always likable Roberts and Hanks, but the supporting cast does an outstanding job. Standouts among them are the charming Sarah Mahoney, who is the cute as a button Vespa rider who takes on Larry as a personal project. Local favorite Cedric the Entertainer is a decent laugh as Crowne’s neighbor who in the perpetual state of having a garage sale. Even an actor who had annoyed me in the past, That 70s Show Wilmer Valderrama, played his role well.

It is because of these performances that makes the film quite enjoyable at times, but unfortunately it drowns under its own inane plot that never quite fleshes out the characters, and the actors work overtime to bring the extra bit of personality that the script should be bringing as well. It feels at times even though the tight chemistry between everyone, the relationships between them are entirely unbelievable, especially between Hanks and Roberts whose relationship never seems quite plausible.

The problems with Larry Crowne leaves me somewhere stuck in the middle. On one hand its refreshing to see a cast that clicks so well, but on the other hand I want to be challenged a bit more, especially from someone like Hanks who has a solid track record in the past. If you are big fan of any of the actors within the film, it is probably worth seeing. However, most of you will probably be better off waiting in line at Redbox for it.